April 27, 2020
This week has continued to be more eventful than we would have liked, by quite a bit. I wrote most of this post on Sat., up to the photo of celebrating Mimi. We miss her already.

A short update first as I don't have a lot of bandwidth for long updates. After I wrote this post, Sat. night at 3 AM, Chris felt like his arms were numb and he might be having a stroke; he blacked out and hit his head in the bathroom. I heard this and after figuring out what was happening, called 112 (see below- he wasn't walking this time) and had an ambulance take him to the hospital. Kids woke up to him swearing like they've never heard. They've been awesome- Stephen standing in the dark at 3:30 AM to wait for the ambulance, Elizabeth getting a blanket to keep her dad warm.

Since then, it's been a long 30 hours but he's still in the hospital in Stockholm. No apparent stroke. Covid test now = negative (but they think he has had it). CT scan of lungs, neck, head look okay except for a subdural hematoma they think is associated with falling and hitting his head. No fracture in his neck, but pinched/impacted nerve. A cup of coffee and a bowl of yogurt improved his outlook today after a really tough night. Hoping that he a) continues to get good news today (meaning the hematoma is going away), and b) gets released. We'd really, really like to come back to the US on Saturday; no idea if this is a good idea or possible.

So to go back in time before we get to the fear & sorrow (hospitals and hospice), a few things...

On Thursday, Chris felt okay. We biked really slowly out to orienteering on the island of Lidingö, in part to pick up shirts, hats, and hopefully a long awaited jacket that Chris and Stephen had ordered. Chris had been hoping for this jacket since he and Stephen started doing orienteering in the fall. Everything else came, but not the jacket. Stephen went off to train with the 13-15 year olds, and we biked (slowly) to where they were training by the Olympic sports center. Cool space. Chris took his inhaler and used it a few times. Elizabeth and I went and roamed the trails while Chris caught up with the orienteering coaches. Want to see someone distance themselves and walk backwards? Mention you are recovering from covid... you'll get a good 3 meters. After a while, Elizabeth and I biked home- stopping 3 times to warm up Elizabeth's hands. There may be a reason the Swedes are still decked in parkas even as we keep trying shorts. Chris and Stephen followed on bikes, Chris not feeling so hot. Warm dinner, tea, hot shower... somewhat better until late that night, trying to go to sleep. Wondering if yet another effort at very slow exercise had done him in, if his oxygen was somehow lower than he knew. Another hot shower, some mandolin playing calmed him enough to sorta settle into sleep, eventually.

I woke on Friday at 5 AM, my ticker going on the many things we needed to accomplish. Chris eventually woke up- we navigated kids on what may be their "last" day of school in Sweden. Their day sorta petered out with Stephen and friends working on an assignment for 20 minutes, then chatting via WhatsApp for a while. Elizabeth had a class meeting where her teacher told the kids he didn't understand why their school couldn't continue remote learning and the kids expressed their fear of going back. We hadn't heard anything about our potential to continue remote learning from the US, but somewhere that morning, I'd had it.... there is NO way the school can handle the issues they have with kids who  have to stay enrolled, let alone kids 3,000 miles away. I emailed the school with our intention. Of course, the person handling the issue was out (we've been shocked at how often senior leadership has been out during key time periods when the school has been struggling to handle issues. Not our problem). I contact the State College Area School District- they are already figuring out how to weave our kids back into what remains of the school year. I breath a sigh of relief.

Kids were managing whatever work they had and I was working when Chris summoned me quietly into the backroom.

He felt dizzy and worried... we embarked on another set of calls to see what we could do. 112 is the emergency # in Sweden- the equivalent of 911. After a long conversation, they determined that he was still capable of walking... he should call 1177 (you surely know that # by now, yes?) He did. They wanted him to call the local clinic. He called the local clinic, is told someone will call back later. He calls 1177 back, asks where he should go for help. (this all sounds more seamless than it is- press 2 and to get english leads him to a message in mandarin once. The good news is the 1177 number is much easier to call now- the wait time went from 45 minutes in March to maybe 2-3 minutes now. The absolute run around of "we don't want to see you, just rest at home" was way too much, but also indicative of the pressure on the system).

The nurse on 1177 reluctantly tells him the location of the emergency room at Karolinska, the nearest hospital. We fill the kids in on what's happening (our apartment is small enough that they already knew most of it), and ask if they want to go with us. No way! Zip, zero, nada- no interest in going to the hospital. I give them permission to watch movies, play video games, or whatever they want. Pack a bag of water, a banana, a charger for Chris' phone. Elizabeth helps me turn two handkerchiefs into masks with hairties. Out the door we go to wait for an uber to the hospital. The prospect of help is helpful... tired of the maybe 50 phone calls Chris has struggled through.

A quiet ride to the hospital. Dropped off where my dad and I visited in September with his cut hand, things are different now- the waiting room is quiet, but to get to it, you have to be let in a glass door to a nurse who is screening people at the door. We manage to get Chris' personnummer understood (3 times, including writing it down on a piece of paper and handing it back, along with the pen, to the non-mask wearing nurse). She sends us back out to the covid ward- turn left, turn left, turn left, find the door by the blue Dalarnahast (the Dalarna horse). We find the door- Chris disappears in, leaving me outside. I sit on the cold concrete for a bit, staring at Stockholm's unassuming covid ward. A few minutes later, he texts that I should go home- it might be a while. I navigate the hospital grounds on foot, past the construction to a bus. As I wait for and ride the bus (some masks evident, mostly not), he sends more texts as he navigates the covid ward (devoid of much furniture, set up to with separated spaces easy to clean). His oxygen levels are tested and are 98. They draw blood and run a viral panel (but no covid test). The doc (she's had covid) eventually comes. In perhaps an incredibly ingenious test, she has him do air squats to see what his O2 levels might be with exercise; he gets past 50 or so then stops. She informs him that he can't possibly be dizzy if he can do air squats. His O2 levels remain fine. She sends him home with a gentle rebuke about coming to the ER, but he's glad to have actually seen someone. Home on uber for a sandwich, mango lassi and a chance to lay down.

We talk with Chris' parents, who are juggling phone calls with family in Florida. I wrote about Mimi's great escape a few weeks ago- taken south by Aunt Joan just before things shut down. We knew that Mimi was in decline and talked with her briefly, perhaps on Thursday? Amazingly, hospice had been arranged for and Mimi was on oxygen herself. We talked with the kids, let them know she seemed to be in decline.

I take the kids to the rope swing. It's a quiet evening in the neighborhood- gray clouds rolling by, the trees in bloom. I stare off into space while the kids try to make the rope swing go higher. My only request? I don't want to go back to the hospital; please don't hit the tree. We find a fritillaria, one of my favorite woodland flowers, on the way home. In Swedish, they are called "Kungsängslilja"- King's Bed Lily (also a "snakehead" lily). 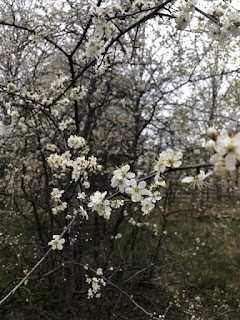 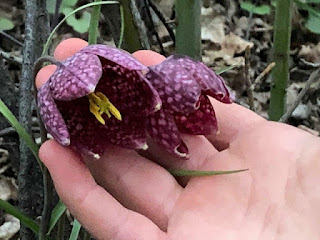 Elizabeth and I cuddled for a long time at bed last night... "Mom, I'm so sad about Mimi." Yes, I know. Elizabeth and Mimi had something special together- I can't count the hours they've spent scheming up one thing or another, with a 90 year spread in age. A few years ago, they planned out Elizabeth's "popsicles and pearls" birthday party. A few photos that I could easily find; we have many more. How cool is it to have a close relationship with one's great-grandmother... 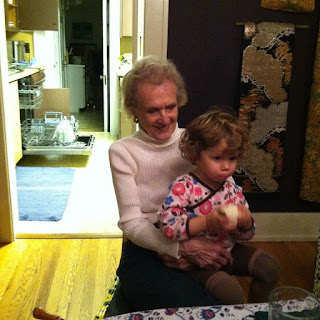 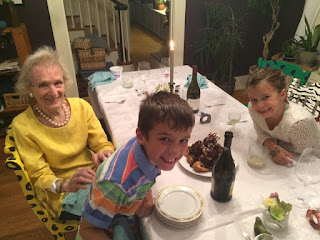 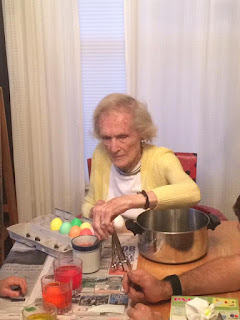 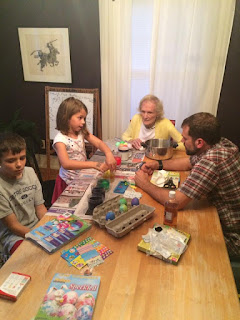 Today, we talked again with Chris' parents- just after 10 AM our time, 4 AM east coast time. So very sad to learn that Mimi passed away last night, about 3 AM eastern. It seems she knew it was time- she didn't want her curlers in for bed, but wore her jewelry and died in her sleep, surrounded by family, a serious blessing in these times.

Quite a lady to the end. I'll leave it for now with a picture of Mimi on her 100th birthday this January. 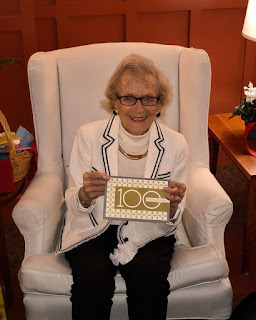 Postscript:
We went for a gentle walk on Sat. afternoon, thinking about Mimi as we wandered the woods. Quiet evening until all hell broke loose at 3 AM; see above.

We're hanging in there, working on packing and sending more stuff home via Ship my Bag (figuring that when he can travel, Chris won't be carrying anything). I've been dropping work related stuff where I can (I'd volunteered to guest teach in different classes as I had more free time). Request to co-authors on papers to handle it. I'm learning how to ask for help... necessity is the mother of learning and practicing new skills?

Maybe I can learn from Mimi and her years of putting on her makeup and showing up no matter what. Mimi- here's to you as inspiration.