c9: covid in the house + 2 great escapes + 1 trip to Uppsala + some random thoughts

March 26, 2020
This post is a little scattered, but so is life these days. I'll start with some pretty flowers... 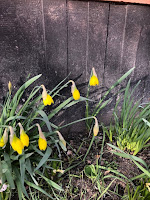 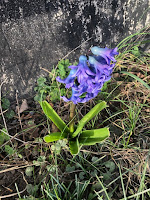 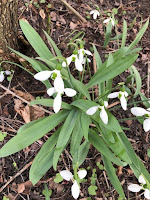 It's been more than a month since we went to France, and a good 3+ weeks of compromised lungs for Chris. On his birthday, 13 March, he could barely handle a block walk. He's been slowly recovering since then, with only a couple of days where he's felt worse.  For him, it is mainly a feeling like something is sitting on his lungs. The long recovery period and the feeling of inflammation in the lungs seem to suggest a pretty good chance that this has been covid according to our friend Dr. Jamie. He went out for a walk in the woods today (saw no one) and that seems to have been OK, so we will count him at least on the right track.

Kids have had nothing noticeable. I had a period of achy bones and a headache, but no lung issues. Any sign of anything and we get twitchy. Hypochondria has a new meaning.

Chris finally called Sweden's 1177 health number back today. He had a few questions:


Like many, we're in a really weird period of limbo, heightened emotion, of being between, of grief, of beauty, of spring.

The kids are figuring out being schooled at home (for Elizabeth, it's harder than her actual school). I've only barely resisted the urge to throw a computer out the window as we've struggled to figure out assignments, when she's supposed to join a class room hangout, etc.

Recess time means going to the nearby soccer pitch, rope swing, or ambling the neighborhood. Lots of frisbee and soccer. Laughter at the rope swing. 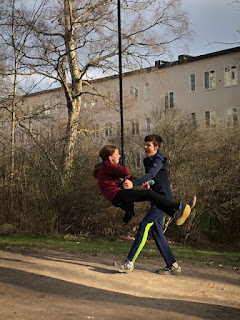 Our neighborhood is generally very chill, though last night, Chris took the kids to do a reflector trail run... they came back quite quickly after hearing a blood curdling scream in the woods. Chris sent the kids in, called the police. No idea what happened, but it thoroughly rattled all three of them. A walk today in the light revealed nothing.

In the meantime and in the broader world, we're happy to report on not just 1, but 2 great escapes. Chris' grandmother Mimi turned 100 in January. She'd been living in New Hampshire in a retirement center, a good 25 or more years older than anyone else and still on her own. After her birthday, Chris' dad and his sisters decided that the time had come to move her-- so she took a field trip to Florida with Chris' Aunt Joan. Not long afterwards, the NH retirement center shut the door for anyone coming in or out- and started serving meals in rooms. Mimi is now set up with Joan in Florida, apparently happy and able to facetime with people for company. Great Escape #1.

Great Escape #2- Chris' parents were in the Bahamas until Monday this week. They may have been on the last flight out (or nearly so) when the Bahamian government jumped from Threat Level 1 to Threat Level 4, and closed the country on Monday afternoon or thereabouts, issuing a curfew and otherwise shutting things down. Flight to Boston arrived in a snowstorm, and a driver dropped them off to inches of fresh snow in Hanover.  Great Escape #2.

We're glad our family members are situated as the US shuts down day by day and have been thinking about how to support our broader communities, even from a distance.

We're reminded of 2001, when we had been traveling the world, but moved into our Seattle apartment to start law & grad school on the 6th of Sept. We remember thinking at the time how glad we were to be stationary (esp. as Chris' parents were also traveling then and ultimately made it home).

For our own situation, the Fulbright Program globally has called everyone back to the U.S.  Officially, my Fulbright ended at the end of February and both Chris and I are in Sweden as visiting scholars. To reinforce people going home, the Fulbright program also canceled health insurance for people (extended to 6 April for the Swedish Fulbrights). We have Swedish coverage and Penn State int'l coverage, so are fine... we continue to examine options and realized that we didn't want to go back to the U.S. in the midst of a mass evacuation, esp. given our own status. And now where are some of the U.S. hotspots showing up, 10 days later? In locations where there are int'l airports, among others. Anyway, no news is still no news on that front- we're in Sweden for now.

We did decide that getting rid of some of our stuff would be useful, so have been packing bags and sorting through what we need and what we can send now through a courier service.

To expedite this, I took a short field trip to Uppsala yesterday. Waiting until after the morning rush. Me and 1 other person on my train car.

I walked along the Fyris River, took a quick picture of my favorite building from 1666. 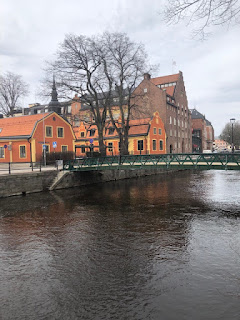 Bathed in sanitizer, I dropped off a bag of stuff in my office for a colleague to take to a friend-- figured the books and games could sit there for a bit. Picked up my remaining books, cleaned out the office, closed my office and left the key for my colleague.

This sucks. This is not how we expected to leave Sweden. I happened to see someone I knew in the office, but only sorta-- could only halfway choke out a few sentences (trying furiously not to cry or touch my face). Turns out I really like my colleagues at Uppsala- I like be able to compare notes, to share tea over fika, to learn more about how they are approaching work, research, life, etc. Closing the door quietly behind me and leaving reminded me of leaving my law office in Seattle-- 11:45 PM, 3 July 2012-- shutting the door behind one life and walking into  another.

Chris is missing his colleagues at Stockholm University- their daily trips to get "dagens lunch" - the day's lunch, fika in the break room, a chance to compare notes. His colleagues have set up a "zoom' room for 10 AM fika- grab your coffee and hang out to chat.

After pulling myself together in Uppsala, I quietly left the department-- perhaps not to come back on this trip. Peace researchers for the future- my favorite sign. 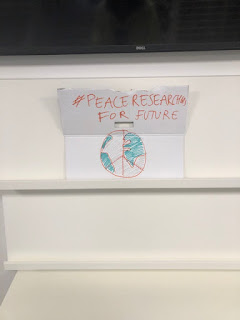 Quick trip to the hardware store to find replacements for some things that have broken. Odd dance to avoid people and navigate the store. Checked out, ventured through town. Managed to find some ski boxes at a ski store- I'm guessing I was the only one to come in all day as the store manager was unusually talkative- he mused for a while about how Swedes used to be fairly remote, and only recently started inviting people into their homes or openly greeting each other. He wondered what effect this would have on Swedes in general.

Worked my way home on the train with two 10' long boxes- through a deserted train station, onto a bus with only a handful of people. Things have shifted here-- much quieter, many fewer people out (except, apparently on sunny sundays).

Today, I went roller skiing for some mental sanity- found a garden in the lake, a random lighthouse, a castle, some flowers, some sunshine. 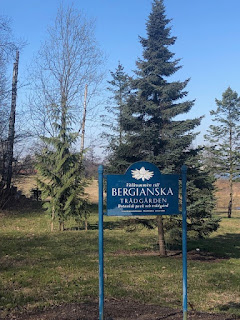 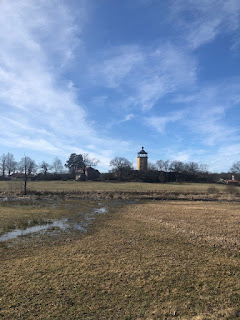 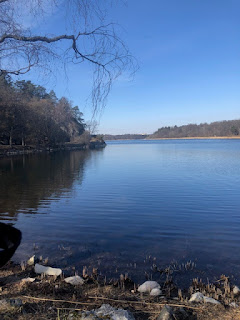 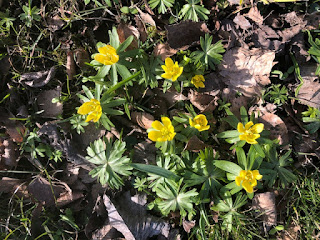 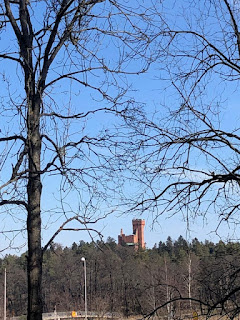 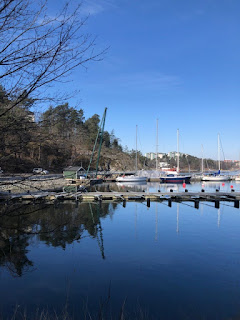 I thought about going swimming- figured the Baltic might wake me up.

Explored the paths on my roller skiing, careful not to trip over rock or root. Smooth dirt path is better than gravel. Found some more secret flowers and a "secret" box- a place to write your secrets and leave them in the woods. 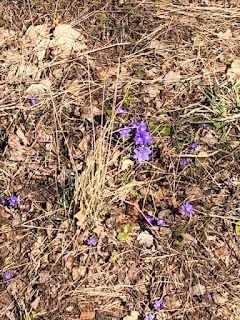 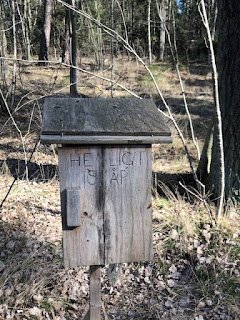 We've been trying out local "take away" from restaurants- lunch today from a nearby restaurant (where we had julboard). Wrapped lunch in my jacket and tied it around my waist- almost like a kangaroo pouch of veggie lasagna and fresh pad thai. 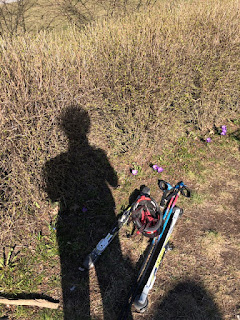 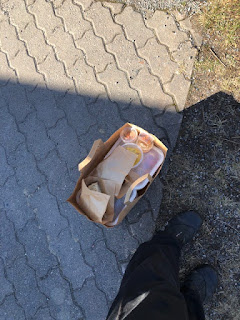 I'm finding it hard to remember what I was working on before... whatever before was. Small steps on projects, a reminder that everyone is struggling through a whole host of issues-- so patience for me, for them. In between bits of work, we're doing a puzzle, helping the kids, packing, cooking, and enjoying the sunshine.