April 30th. One of Sweden's more major holidays. The start of a long weekend-- tomorrow is May Day. There is normal and then there is this year.

Most years, people gather their picnics and stuff to burn, throw the wood or whatever on a big bonfire and stand around in large groups to sing songs about spring coming along. And yes, apparently hedge hogs come out around now too. Large, large crowds seem to be a common theme. 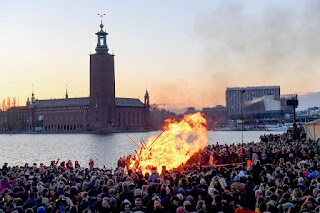 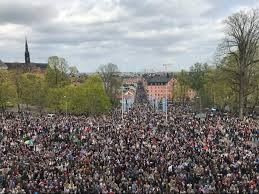 This celebration dates to the middle ages; I'm borrowing a description from elsewhere:
In the Middle Ages, the administrative year ended on 30 April. Accordingly, this was a day of festivity among the merchants and craftsmen of the town, with trick or treat, dancing and singing in preparation for the forthcoming celebration of spring.

Among farmers and peasants, it was an important day in the calendar as the annual village meeting was held, with eggs and schnapps as refreshments. The meeting also chose a new alderman. At Walpurgis (Valborg), farm animals were let out to graze, and ever since the early 1700s bonfires (majbrasor, kasar) have been lit to scare away predators. People also fired guns, shook cowbells or yelled and screamed to keep the predators at bay.

In some parts of the country, young people went round singing May songs in return for gifts of food on Walpurgis Eve. Those who gave them nothing were treated to a ‘nasty’ ditty. Elsewhere, people visited spas to drink the health-giving water and to amuse themselves.

-----------------------
Today, Valborg seems to be picnics and singing and bonfires. Unless you are Uppsala. Then you gather around the Fyris River and watch people go over the waterfall outside my office in homemade boats in half ass boats. Uppsala hosts an extra 100-150,000 people on Walpurgis, many to watch people go off the falls. The videos below are well worth the entertainment.

2018 Fyris River for comparison (we recommend watching this on 2x speed): https://www.youtube.com/watch?v=WZldercyckI&t=709s

People gather for picnics in the park, songs in the evening: https://www.youtube.com/watch?v=CmPNJRBN84E (time lapse of the park in Uppsala).

In the evening, there is a ball at the castle- full ballgowns & white tie... of course.


But not this year. Among things that are closed or canceled, the Walpurgis Eve events were canceled, subdued, or livestreamed.  For more, see https://www.thelocal.se/20200429/how-the-coronavirus-has-changed-walpurgis-and-may-day-celebrations-in-sweden

The City of Stockholm's Cecilia Brinck, chairman of the municipal council, gave her "election speech" to the city council. Stockholm's student singers sang outside city hall, well socially distant and a small bonfire to light the way for the walpurgsmässoevening.


My favorite? In an effort to dissuade picnickers in the City of Lund, they spread 1 ton of chicken manure in the park yesterday...