The weather lately feels like our mood- fickle, changeable. Sun, then rain, then snow. We've had some lovely walks around the neighborhood both during the days and evenings-- all shades of blue. 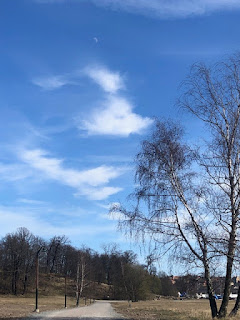 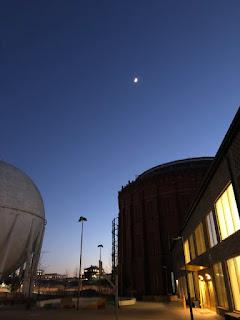 In Sweden, it's also Taco Fredag: Taco Friday. Swedes eat tacos on Friday nights and stay home. I hope they do.

Last night, we took advantage of a break in the howling winds and sideways rain to take a walk. The Texan Longhorn Restaurant (the local restaurant on the corner, still open) was packed last night, more busy than I've seen it. After poking around the neighborhood, we happened to look up and see the sky darkening again- we ran for home. The wind howled so hard we thought the windows would be ripped off the building. The construction fences nearby have all blown over. We woke up to a fairly solid covering of snow this morning, more than we've seen all season (it's still not that much). 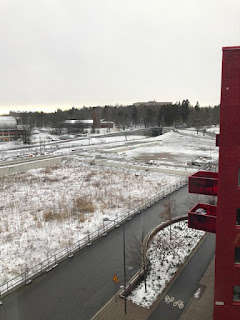 Week 3 of schooling the kids at home and while attempting work at the same time. Stephen and his teachers seem to have a rhythm. Elizabeth and her teachers seem to be inventing a new system every day. She's spending more time on school work than if she'd been in school (also still an option for her to go- we've kept both kids home out of risk from us spreading anything or them bringing something home).

Having four people work from home has been entertaining. Yesterday, both Chris and I guest taught online at the same time- Chris from Stephen's bedroom, and me from Elizabeth's bedroom. Doors shut trying not to pick up each other's lectures. Stephen is deep into a discussion for humanities on whether the US should have dropped the bombs on Hiroshima & Nagasaki. Elizabeth has gone back in time to around 945-- deep into the study of vikings (sooner or later, I'll do another post on vikings). 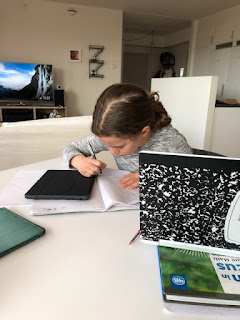 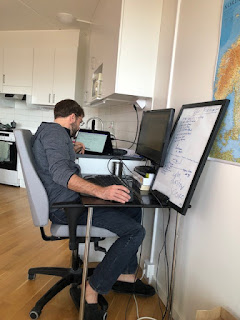 Work has not let up on our end. I had a two day zoom meeting with people participating from time zones that ranged from Hawaii to Europe- anyone interested in a deep dive on sustainable aviation fuels or the future of flight according to NASA? Fascinating discussion right now on what's happening with the airline industry. Along the way, I learned this week that I'm part of a team that received a seed grant from Penn State to work on water security for Pennsylvanians who rely on private wells- some 25% of the population. Concerning too as PA has no standards for how such wells can be drilled.

In between, we've been keeping our head down, trying to figure out who gets to learn to cut Stephen's hair (next in need of cutting), who is offering "take away" (take out) to vary our food, and how to stay sane. Our own sheltering in place feels odd when we could be operating fairly normally. Chris is finally feeling better enough to run, and stir crazy enough to need it. The other day, I roller skied, Chris and Stephen took turns running and using the new electric skateboard, and Elizabeth biked.

Chris' Stockholm U. colleagues have set up a 10 AM fika on M/W/F via zoom-- a chance to drink coffee and compare notes. My Uppsala colleagues held an "after work" zoom session with drinks and trivia- nice to see everyone. 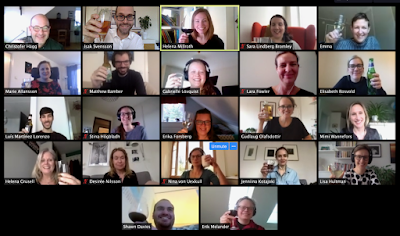 Such sessions are interesting to hear from others' perspective what is happening. There seems to be a vast cultural divide in Sweden. Swedes we've spoken with seem to be fine with the government course of keeping most things open. "We trust our government" seems to be a common theme. Non-Swedes in Sweden don't seem to be fine with the approach at all as the covid deaths in Sweden climb (but maybe I'm projecting). An American colleague I spoke with this week has two teenage kids- one is in Swedish school where almost all the kids are attending, and the other is in an international school where almost no one is attending. If we wanted to get Stephen's hair cut, we can simply get it cut. However, we're trying really hard not to go near other people.

There are more covid-19 restrictions day by day in Sweden. I actually thought for a moment that it was an April Fools joke on Wednesday when the government finally made mandatory a shut down of elder care facilities (before, it was apparently just advisory that you didn't visit a care facility or retirement center). Grocery stores are now supposed to provide ways to keep distance, but of course, the law is apparently not enforceable. Here's a set of pictures of social distancing in Sweden.

Easter is an an important holiday in the Nordic countries- a chance to travel, see family, go skiing. You may not realize just how many days are associated with Easter:
Dressing up for Easter seems to be a thing- I've seen more than a few kids with bunny ears. Easter egg hunts are also a thing- who knows what will happen. Family dinners apparently rely on traditional food: pickled herring, potatoes, gravad lax, meatballs, eggs topped with fish roe and Jansson’s temptation – a dish of potatoes, onions and anchovies in a cream sauce. All washed down with spiced schnapps. Let us know if you need some pickled herring- we can send you some.

At this point, Swedish officials have gone from requesting people not to travel for Easter break (Påsklov, which starts this weekend) to saying they should not travel. The main reinforcement of this seems to be a shut down of the ski areas, which had been open until now. By contrast, Denmark (which has almost totally been shut down for the last few weeks), is contemplating allowing the churches to reopen for Easter.

Today is the kids' last day of school for another 10 days. We were supposed to travel this weekend to Rome, go explore around Pompei, then go to Greece to go sailing with friends from Seattle. You can imagine that there are several things wrong with this plan.

Instead of our crazy trip, we're trying to figure out if we can go camp on the nearby hill to vary our routine a bit. But then of course it keeps snowing. We had also thought this spring of going skiing in N. Sweden, but this is also not a good idea, and we've now shipped our skis home (or apparently, shipped them on a tour of Europe: our luggage has been to Paris, Denmark, back to Paris, Germany... who knows where it is today).

While we feel stable and doing okay, the very real change in global circumstances is hitting home. At the individual level, we'd love to know for sure if we actually had covid, but don't know and can't find out. We have plenty of family and friends who are in high risk categories and doing their best to protect themselves (digging through old photos seems to be a good past time).

In our professional lives, we're interfacing with people where there is a lot of uncertainty. As an example, for law students who are graduating, there is a huge need for legal services, limited ability to pay, and the very real potential that the bar examination, usually held in July and necessary for licensing, will be canceled or postponed (both NY & MA have already delayed it). I've had numerous flashbacks to how hard it was for Chris to find work in the 2008 financial meltdown- he was on the job market from 2006 to 2012 one way or another.

I'll be interviewing law students for spring and summer work later today. I hadn't planned on overseeing too many students while in Sweden, but I have grant funding and our law students' internships and summer opportunities are disappearing right and left. So now I'm trying to figure out how many I can hire and juggle their work from here (or wherever).

So for now, it's a quiet school and work day, except for the ice chunks blowing off the roof. Happy Taco Friday or however you may celebrate... and if for some reason we manage to create a chariot of cats, I'll be sure to post a picture.