On Saturday, 29 March, we took a break from alpine skiing and went cross country skiing again. Carson had stayed with us for a "sover over" (a sleep over). After gearing up, it was nice to be able to walk out our apartment 5 minutes to a ski trail. Good skiing with our crew on a mix of classic (in the tracks) and skate (on a flat track) gear with a lot of different speeds. No one seemed to be in too much of a hurry that day, though there were a few short race sprints thrown in. 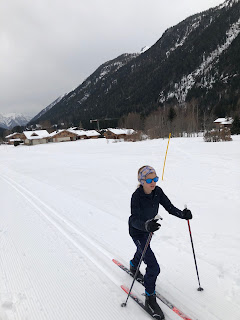 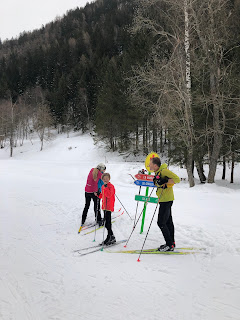 Paused for a few minutes to rent sleds for the kids (top 2 photos by Colter, but then I caught the master photographer himself in action below) 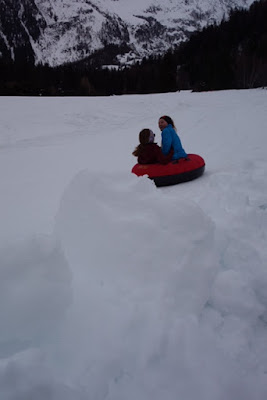 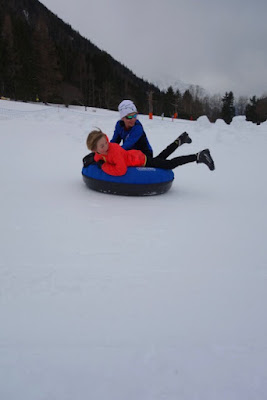 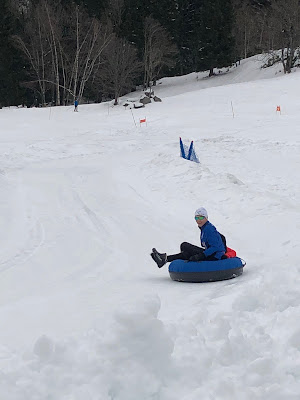 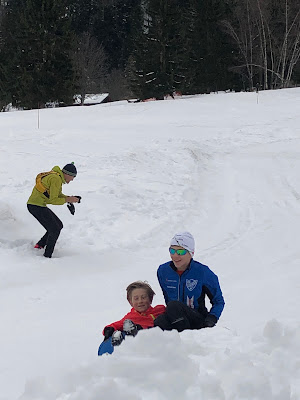 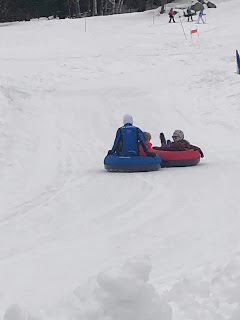 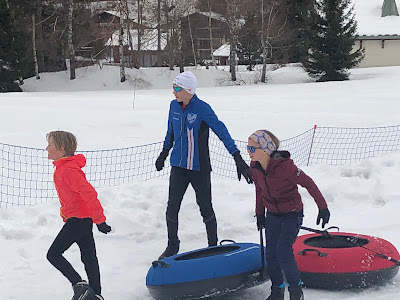 After skiing, we had a quiet afternoon and evening... the Leys crew spent the afternoon moving stuff to their next location, and the Fowler family read, blogged, and hung out as the rain outside shifted to snow coming down gently.

Sunday dawned glorious and bright, fresh snow blanketing everything. As you can see by Chris' post, he and Colter headed off early to backcountry ski. The kids and I rallied to the bus, back up the valley to Baume, where we'd been able to ski just one lift earlier in the week.

The weather, snow and skiing were glorious- so much fun to be bouncing through the powder with stunning scenery all around. The three of us skied for a while, then met up with Annie and kids. 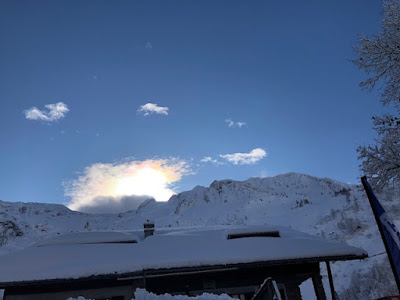 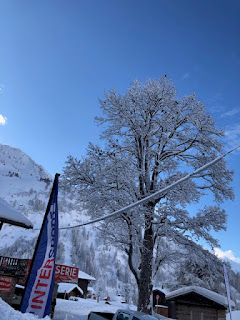 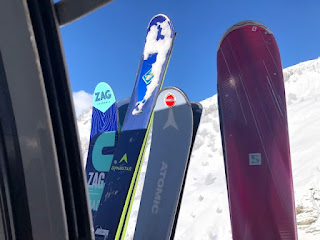 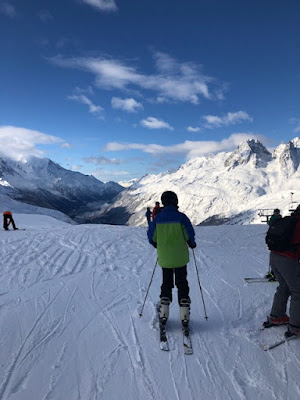 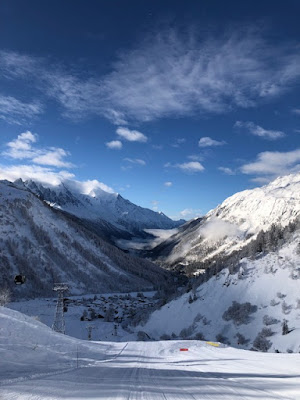 Some of my favorite pictures of the kids from this trip. 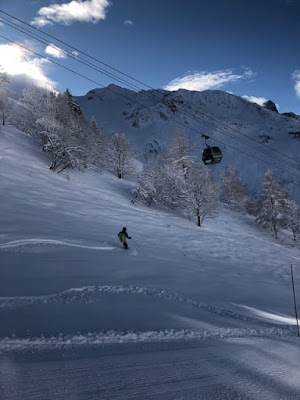 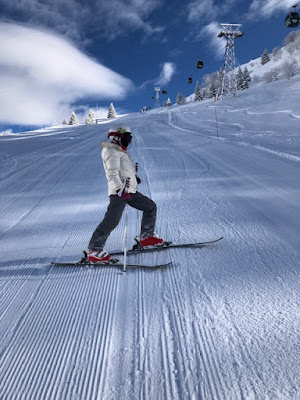 Stephen isn't sure why I took a picture before helping dig him out, but Stephen buried in the powder was a common scene. Luckily, fixing his boots so they were the same size meant his skis stayed on. 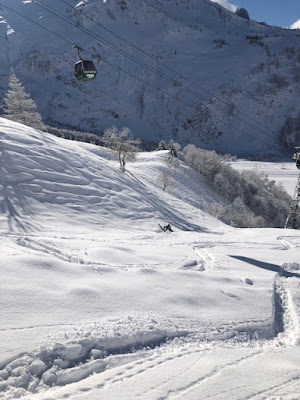 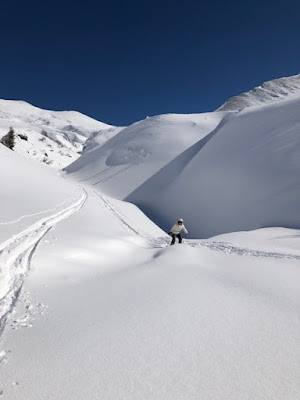 A pile of kids having fun, going up on the pomma lift to the very, very top 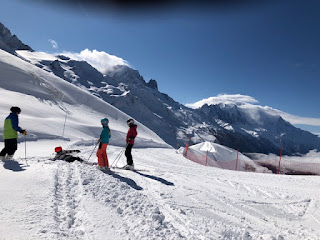 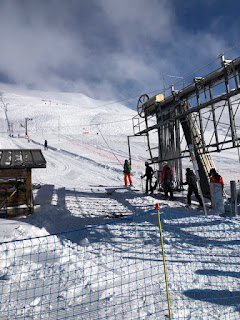 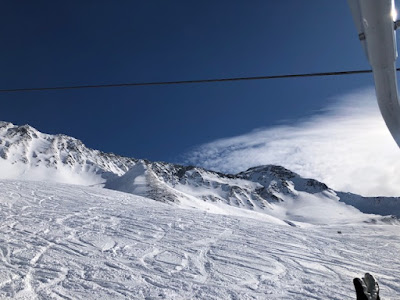 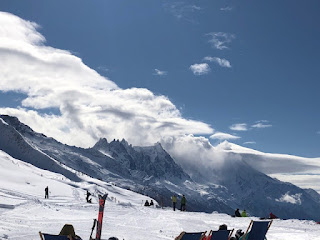 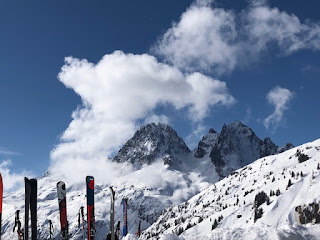 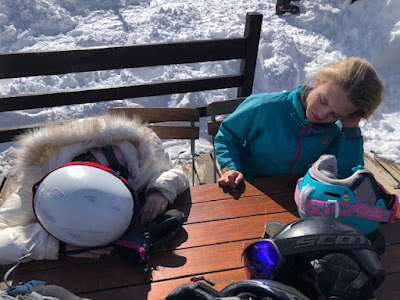 We had met up with Chris by this point and took him into the area near Switzerland for some runs. My favorite sequence of the kids below. 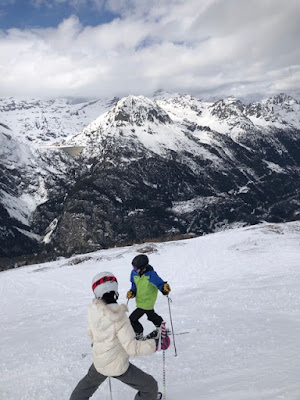 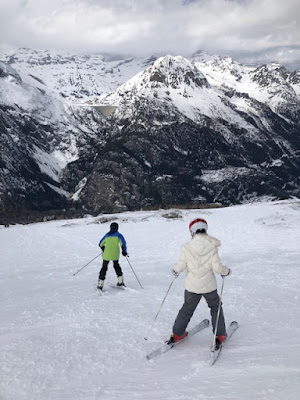 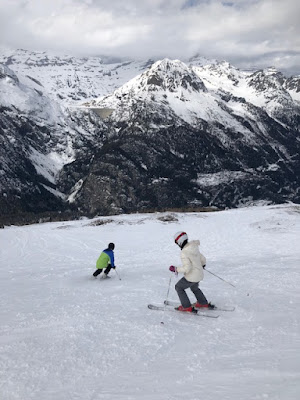 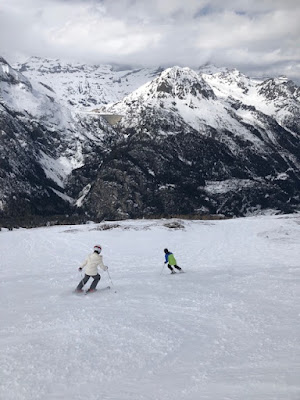 We finished this crazy run, legs burning. As we rode the lift up, Stephen noted that he'd love to do it again. As we neared the top, the weather shifted and the clouds dropped in. Instead of skiing towards Switzerland, we headed back down the mountain, barely able to see each other as we inched down a short stretch at a time. A drop off appeared out of nowhere to our left, a reminder that this area bears a lot of caution and is subject to quick changes.

After skiing, I ventured to the store to buy the fixings for a raclette dinner... the fellow at the store was quite happy to sell me whatever I needed for a party of 9 (the Leys family + the Fowler family + Tom, a friend of the Leys family who had arrived that day from Salt Lake City). Chris was questioned when he bought 6 baguettes (1 euro each, so actually not a big investment). 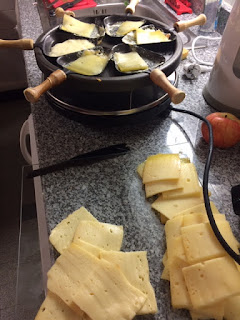 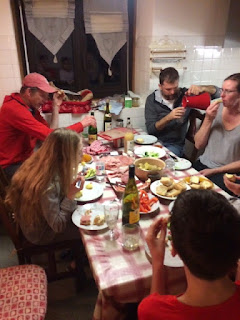 Overall, a remarkable ski trip- terrain unlike anything I've skied before. Also a remarkable change in comfort from the beginning of the week to the end. We were super excited (for obvious reasons) to have as much new snow as came down. The guy at the ski shop asked for our number so that the next time they needed snow, we could come back (we were skiing in Colorado for last spring break and had 5 feet dump on us while we were there). We spent more time with the Leys family than expected- the kids playing and skiing together a lot, and a nice chance to catch up.

In summing up the trip, both our kids noted how much they like the powder and skiing... it was fun, they said (for anyone with kids this age, you'll recognize the challenge of getting more description out of them). We were picked up by a shuttle on Monday and traveled via van through the pouring rain to Geneva, then plane to Paris, then to Stockholm. I'll leave tale of that travel to my next post on traveling and living abroad in a pandemic, but for now, I don't want to spoil the crazy spectacular nature of this trip. Worth going to? Yes. The scenery is unreal and there is a lot to explore. Worth being prepared for challenging terrain and variable weather? Of course- it's the Alps!