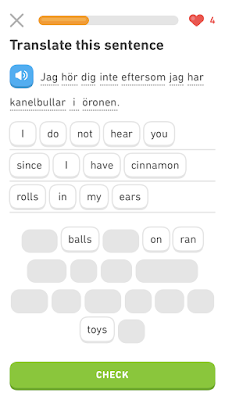 I can't hear you since I have cinnamon buns in my ears.

This in fact may be a useful phrase, introduced to us by duo lingo, the online program I've been using to learn Swedish. Stephen, the most fluent among us, has readily adopted this phrase; it is perhaps a fitting phrase for a near teenager who turns 13 in about 3 weeks. There seems to be a lot that he hasn't been able to hear today.

No idea if the Swedes actually use this phrase.

When we first came to Sweden, we quickly understood why the Muppets have the Swedish Chef-- Swedish is actually quite a lilting language. More so than Norwegian or Danish. Finnish is its own language group entirely- no correlation at all. I speak a little Finnish, having been an exchange student in Finland in 1991. It's of no help here.

In case you need to watch the Muppets or remember what the Swedish Chef sounds like:

On my end, I've been trying to get beyond the Swedish chef level.

Jag lär mig svenska. I am learning Swedish. [But it's really, really slow]. Duo lingo is a good way to practice a little bit every day- I've learned almost 2,500 words.

My efforts to say something that a Swede will recognize fall far short, however. Not trying to be a naysayer, but I don't think I'll ever be able to pronounce the number "7" correctly (sju). This short video sums up the challenge: https://www.youtube.com/watch?v=pHs7xB8MOAs. I've bravely tried ordering tea and a kardemummabullar (cardamom roll) at cafes- sometimes it works, most often not.

It's actually a significant challenge in that people between the age of about 6 to 70 all speak fluent English. The incentive to try is less when it's more efficient to simply use English, but it's much less fun. If two Swedes are having a conversation in Swedish and Chris or I join, they will immediately switch to English (even if they are talking about that doesn't pertain to us).

At this point, I've spent enough time on subways and trains to have overhead a lot of conversations. It's only been in the last 2-3 weeks (maybe) where I can start to understand what is being said around me (though my exposure to spoken Swedish is now limited to tv and the occasional passer by while we're out walking). I can piece together the general topic from articles in our local neighborhood newspaper.

In thinking about what this experience has been like, we're realizing just how much our kids have picked up beyond what we have (or can). Stephen in particular can hold his own in Swedish- and Swedes will even understand him! The classic immigrant experience- kids pick up language and local dynamics faster. I have quite a new appreciation for this (that, and the use of the google translate app that includes a camera you can point at text and it translates the words for you-- also quite useful).

For now, just make sure you keep the cinnamon buns out of your ears...