C4: hemskola = home schooling (and feeling like I'm waiting to go off a waterfall)

March 17, 2020
Day 2 of keeping our kids home from school. Quite amazingly, the kids' school is still open, though high school and colleges are being closed as of tomorrow. The Swedish government is leaving it up to each principal to decide, and so far, the CEO of the kids' private school has left things open.

Chris still has trouble breathing much (bronchitis? more?): a walk down the block can be too much for him. So we're not sure if we're exposing others, or if others are exposing us- either way, we're in family quarantine with occasional forays to the park or to the store. This post isn't quite linear in time, nor is time being linear right now... so be it.

On Monday morning (yesterday?), we talked with the kids about their schedules, and drew up our own schedule. Can't say we've been keeping to it quite on time, but it's helpful to have guidance for the day. Elizabeth creatively rewrote their bedtime to be 10:30 PM (it's been more like 10 PM, give or take, so she's not far off). 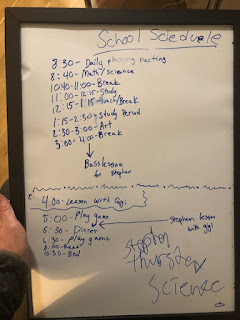 In piecing together what they should do in a day, it's also been interesting to see what the kids are working on (and what they would have been working on while in State College). A challenge to weave it all together, especially as their teachers here are now a) teaching a handful of students in the classrooms, b) providing assignments for the many students not in the class, and c) prepping for the school to be shut down for some unknown time period. We don't have a lot of guidance for home schooling so have been making it up a bit. The kids report working harder at home. Lucky them!

We've also been cooking and doing experiments- Elizabeth helped me make pizza dough. So we also did an experiment about what happens with yeast in a bottle with a balloon! Thank you to the Exploratorium's Science of Cooking (my favorite science museum in California)... quite awesome. 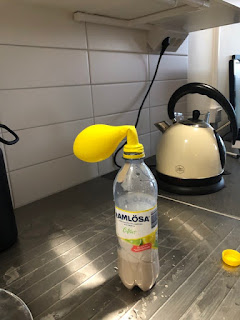 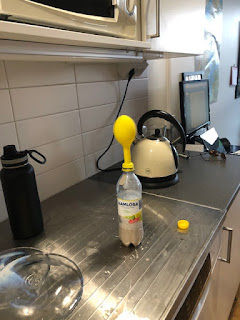 We had to switch bottles and lost some air (even I didn't realize how much the yeast would foam up when gathered in a bottle). I can even multi-task: play chess and keep a leaky balloon in place.
. 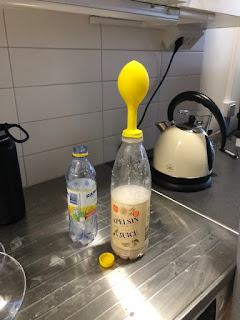 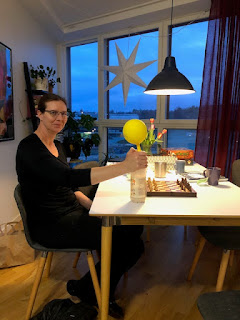 In terms of actual school work, we've gotten creative. Chris' parents are working with the kids on literature- a close read of Tom Sawyer, chapter 1-2 yesterday, and a lively discussion via zoom (the scene from our end, pictured below left). Today, my friend from when I was an exchange student in Finland (in 1991!) coordinated with her kids to teach my kids and another friend from PA chess- they walked through a chess game from start to finish. 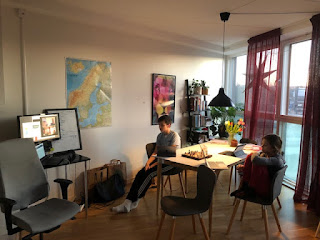 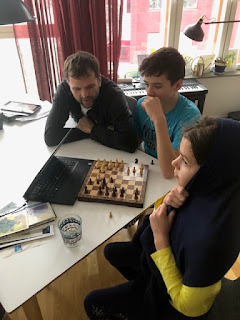 In between work sessions, we've been trying to take breaks and get outside- the weather has varied from rain to snow to sun and back again, so we've been aiming for the sunny breaks. Pictured below- a nearby park that I've wanted to explore for a bit. Imposing statute of Carl Linnaeus, who was trained in Sweden and developed the classification system still largely used for plants/animals. 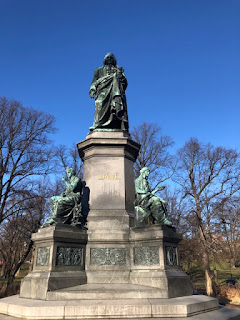 A bit hard to see, but this is a river of crocus... beautiful. 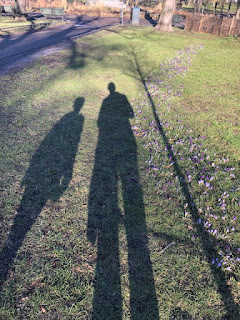 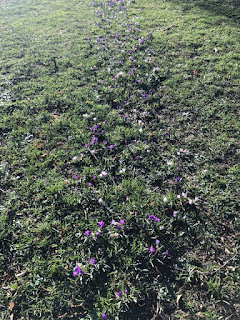 This is a crazy and still quite alive tree... 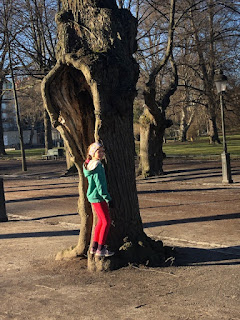 On our way back from exploring the neighborhood today, I restocked a bit. Still interesting to see what is in the store for groceries, and what shelves are empty. Restocked today: potatoes, ketchup. Empty or low: frozen fish, knäckebröd (flat bread), svenska pankakor (swedish pancakes), flour, cardamom, popcorn. The store had plenty of people restocking-- so I think when a shipment of say, ketchup, arrives, there it is... they are definitely working hard to keep up. I feel like the grocery store workers, bus drivers, recycle truck drivers are my #everdayheroes right now (along with the entire set of medical workers).

On Sunday, the kids and I biked to a game store to get a chess set and some other games. Perhaps not surprisingly, it was busy (and people kept a safe distance from each other). Nice to have an actual chess set to play with. And a couple of new games, including Sheriff of Nottingham and Chronicles of Crime. We'll report back. 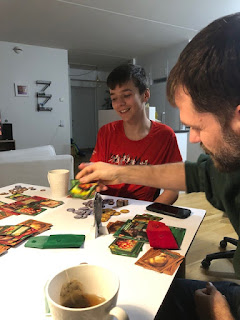 As a side note, the Swedes normally keep a healthy distance from each other. Social (really physical) distancing is the norm here-- if there is an open seat next to someone, or across the way, you can be sure they will take the seat across the way. Boardings on the subway or bus system is down by 500k boardings/ day compared to last year, so there are fewer people traveling for sure. Chris' colleague joked that this situation plays to Swedes' strength: shy, reserved (except they are really not at all shy once you get to someone).

Anyway, on our way home from the game shop, we came across a couple of people huddled around an older lady (85?) laying on the ground... she had apparently fallen and couldn't be moved. Several of us gathered round to block the wind while waiting for the ambulance; I sent the kids home on their bikes (nice to have free range kids). After she was taken away in the ambulance, I biked home and cried. In two weeks time, my fear is that there will be no ambulances available to come to her. This feeling of impending doom sucks.

I've spent a lot of my life kayaking, and some part of that time kayaking off waterfalls. There is a moment when you've scouted the waterfall, have gone pee for the 49th time (esp. if you are me), gotten in your boat, and are floating or paddling towards the drop. You know that tumult is coming but it's not there yet. You think you'll be okay, but you don't know that. You might also wonder why people kayak off waterfalls, but that's another question. I feel like that now- waiting, waiting, watching, fearing, hoping. We're at 1000+ cases of diagnosed cases of the coronavirus, 8 people dead, and testing only if you are hospitalized at this point. In other words, we have no idea.

I appreciated a note that I saw that for some of us (me included), we need to track the news a lot less. For others still going out to bars, they should be reading the news a whole lot more. Not sure why the Swedish government hasn't shut everything down but the essentials, but they've not yet done so.

In the meantime, the kids have been good sports about getting home schooled, though Elizabeth very politely indicated that finishing up "school" at 6:30 last night was a bit longer than she was used to being in school. We did take a long break to go to the park, so I don't feel too badly... Stephen keeps helpfully telling me that I should watch more cat videos. The ones I've seen get repetitive, but I can offer my favorite video of the day: penguins going exploring the Shedd Aquarium.

When we first arrived in Sweden, we'd finish the day of feeling like we couldn't move- completely wiped from fatigue. That feeling has come back for me these last few days. Time to stop blogging and shape the cardamom rolls for morning.