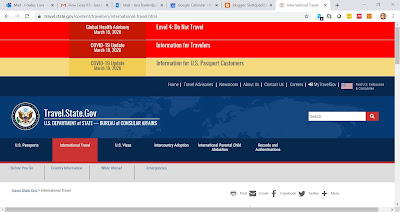 I hadn't planned to write another blog this soon... but hey, conditions are changing quite quickly as everyone knows. The US Government issued a Level 4 Do Not Travel advisory yesterday: calling U.S. citizens home or advising people to plan to shelter in place for the foreseeable future. Penn State's Office of Global Programs asked faculty to come home or plan to shelter in place as well. At least they gave us a choice- not sure what we'd do if someone demanded we return.

Our short answer is for now, we're continuing to plan to shelter in place in Sweden. Why?

No secret but that Chris has been struggling with some lung-related illness - no official diagnosis but bronchitis. It's been a long walk to get down the block and back. His lungs are finally starting to feel better, but exposing him to others (and others to him) seems like a bad idea.

Our house in State College remains rented to our Spanish renters- who are seeing how things are playing out in Spain with friends and family and are very much hunkered down (as an indication of how serious they are taking things, they noted that they ran out of milk but aren't going out for more). We continue to have offers from friends in State College to join them or from my mom in Oregon- she and her wife Kim could move to their remote property in Prineville while we quarantine for 14 days. The normal process of moving in with relatives or friends is fraught given the current conditions.

Flights back to the US are limited- the only direct flight from Stockholm seems to be to Newark. If we did fly through other European countries, it looks like they allow transit through (at least today). Lines in the US customs areas are abysmal and would be a) a massive exposure of all of us, and b) incredibly long and uncertain. No guarantees that things are better later, or that even flying home later will be possible, but for now with impacted lungs, not a good idea.

It will also take a bit of time to unravel what we have set up here- it's actually quite an undertaking to move a household (phones, bank accounts, borrowed piano/bass/books/puzzles, etc.).

Anyway, for now, we are planning to shelter in place- we have a quiet place to live, good internet, the kids in a good place, a grocery store next door, endless park land to explore. Do we expect to come home sooner than planned, which was July? Probably... however, for now, we're here.

Besides, it's snowing today! Weird timing, but we'll take it.

And other good news- Chris' 100 year old grandmother Mimi took a road trip last week to Florida and is now living with Aunt Joan. In talking with Chris' parents last night, Mimi reputedly said "just get rid of it" when asked about her current apartment in a retirement center. How to accomplish cleaning someone's stuff out of a locked down retirement center is another matter, but it's good to have her in a safe place with company and care.