C10: Sveriges "lagom" strategi = Sweden's moderate approach (is it a good one?) 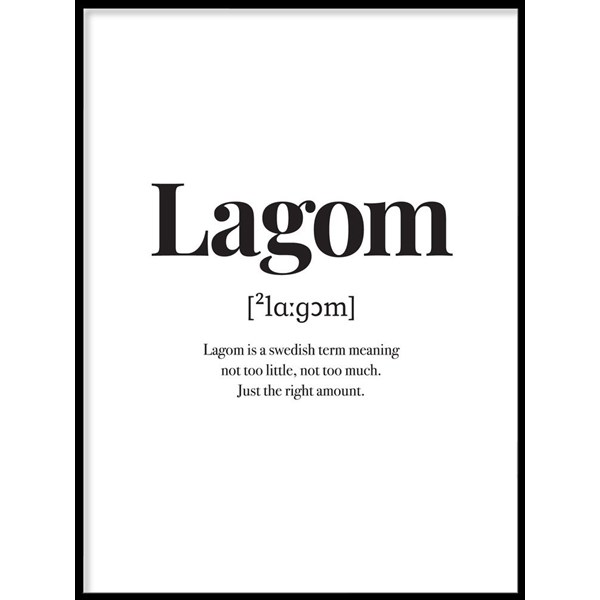 Lagom is a key word Swedes use to identify themselves with. Other countries have their catch phrases too- "sisu" in Finnish, "pura vida" in Costa Rica. I've been meaning to write about this word for a while, though I didn't plan to write about it in the current context. Oh well.

Lagom translates roughly as "moderate" or "just right"- not too much, not too little. Swedes seem to embody this in their daily lived experience - enough time working, being with family, etc. It also shows up as not wanting to stand out. For clothing, black or brown were the colors of the fall and winter (me in an electric green jacket for biking stood out like a sore thumb).

On the lifestyle side, there are plenty of articles about "lagom" being a good approach to emulate. A couple example articles will give you the sense:

Another author defines "lagom" as follows: Actually, I define lagom as "optimal". Meaning, the decision we choose to make at a particular moment or about a certain interaction or situation is the best holistic choice for us individually or for the group, we find ourselves in. That is what lagom at its core tries to do.... Plus, because lagom naturally keeps space and distance out of personal consideration for the other party, this can in many cases be misconstrued as apathy which isn't necessarily true.

The short update is we're still not on lock down: colleges, adult education, high schools are doing remote learning; retirement centers & care facilities are locked down; as of late last week, you cannot bring more than 50 people together; bars are supposed to be shut. However, you want to go shopping for anything? Fine. Want to go skiing in N. Sweden- go for it (to the dismay of the towns up there). Gather in groups for fika...? Fabulous. Our kids are ostensibly still in school, though we've been doing fine for home schooling (Stephen) and struggling through (Elizabeth- she's doing fine, but the logistics have me close to throwing stuff out the window). Anyway.

Given the very different approaches being taken elsewhere, a lot of the world is starting to notice what Sweden is (or isn't) doing. On Monday, 23 March, the Guardian published an article entitled Swedish PM warned over 'Russian roulette-style' Covid-19 strategy. A 27 March article in one of the Swedish papers, the Svenska Dagbladet, is entitled (translated) "The "Swedish line" against the corona virus is astonishing abroad. Not least in neighboring Norway where contagion doctors now sharply criticize Sweden." Today, the NYT's article reads "In the Coronavirus Fight in Scandinavia, Sweden Stands Apart."

This gets more specific quickly. Denmark, for example, is struggling with Swedish workers coming across the border into a country that is locked down for all but the basics... do you let a Swedish healthcare worker come into a retirement center when they've just been out to a cafe?

What's going on here? I've been diving in Swedish history a bit, starting with the question of "what did Sweden do during World War II?" The short answer is they were "neutral" and have been neutral since 1814, a fact Swedes are quite proud of. The longer answer is, as usual, quite a bit more complicated. For this post, suffice it to say the Swedes did their own thing.

I'm not a scholar of Sweden and only have a glimmer of how this society actually functions-- nothing like living through a pandemic to ponder this. I've perhaps become inured to the complete surprise, anger, and fear I've felt from Sweden taking a fundamentally different approach-- and headed into some degree of curiosity (and a healthy dose of skepticism).

I've been reading a lot of "The Local Sweden" to track the news. [Side note: if you want to track what's happening in Europe in general, I highly recommend coverage from "The Local." There is a general European edition and one for most of the bigger countries. Annual subscriptions are about $40 and well worth every penny for original and very salient reporting. I've done enough work with reporters to have heard many of them say if you support local news, subscribe to your local paper].

The Local Sweden published an article entitled "Sweden's coronavirus strategy is clearly different to other countries so who should people trust?" The article points out that there has long been a history of societal trust in government in what has been a relatively homogeneous country and where everyone received their news from the same sources. The article notes that today, however, there are far more people here from a variety of countries with different assumptions in government and different news sources.

[For changes in population, Chris notes that almost a quarter (24.1%) of the Swedish population was either born abroad or born to parents who were born abroad, with a big jump as recently as 2015. Put differently, of the ~10 million people living in Sweden, ~2.5 are considered a "foreign population." This has played out in all sorts of ways, including racism, intolerance, and more. Again, another post for the darker side of Sweden]. Back to the coronavirus.


There is also a different set of messaging happening in Sweden versus other countries. In Sweden, the prime minister's speech from about a week ago was lauded as really important and helpful. I read an English transcript and laughed (my comment then was it was so much noise). Apparently, the prime minister doesn't give speeches that often and the power of health care type decisions is really in the hands of the health agency.

The "who should we trust article" further observes the following: "Compare the Swedish guidelines to what the Danes were told by their government on Monday: "Cancel Easter lunch. Postpone family visits. Don't go sightseeing around the country." The Swedish Public Health Agency's corresponding recommendation is: "Ahead of the breaks and Easter, it is important to consider whether planned travel in Sweden is necessary to carry out."  Another statement from the Swedish Health Minister: ""We all, as individuals, have to take responsibility. We can't legislate and ban everything. It is also a question of common-sense manners."

How does one interpret this? Are you supposed to take a "lagom" approach in figuring out what physical distancing might look like?

As I've noted in other posts, there is not widespread testing in Sweden and there never has been. When comparing with S. Korea, the Swedish health minister said "They succeeded in much the same way as we did when we prevented the infection from those who came home from Italy. They had a pronounced risk group that they followed very closely and tested frequently, just as we did with the Italian travelers. They managed to stop and limit the infection very well in that group, just as we did with the Italian travelers, says Anders Tegnell."

Right. But you didn't test the travelers coming from France at the same time folks returned from Italy, even if they had potential symptoms and asked for testing (like my husband... you can hear my frustration coming back).

The official stance doesn't match our own lived experience, nor our sense that a) infection is way more widespread than is understood given the absolute lack of testing, and b) people aren't taking the admonition to be distant from each other very seriously at all.

We biked to Kungsträdgården to see the cherry blossoms today-- lots of people and most not visibly distancing themselves from others (hard to see in the more distant picture below, but there are a lot of people taking pictures under the blossoms). Playgrounds remain crowded, restaurants have plenty of people. Life has slowed down-- noticeably-- but certainly not stopped. We played tag by ourselves for a bit-- and admired statutes of kings gone by. (Why the fascination with lions? Who knows...) 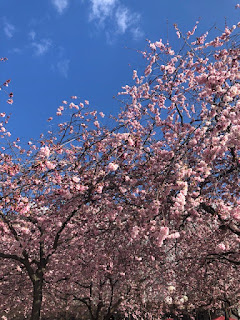 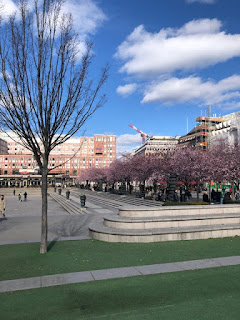 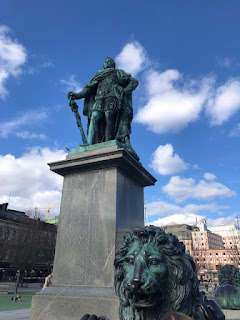 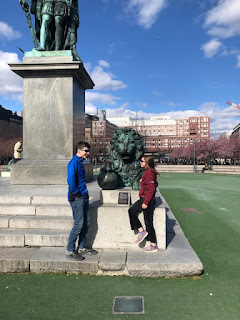 Chris has been conversing (via email and zoom) with a colleague at Stockholm University who has been crunching numbers. For the 70+ year old and above population, many (92%) live alone or with one other older person (we don't know the stats for those in residential or care facilities). His colleague's sense is that multi-generational households might be at more risk.

The 27 March article from "The Conversation" (another great resource for translation of science into lay terms) is entitled "Sweden under fire for ‘relaxed’ coronavirus approach – here’s the science behind it." Basic gist seems to be that the Swedish health ministry sees a slower spread than elsewhere and that the requests for social distancing will work. Sweden seems also to be operating on the "herd immunity" approach- enough people will get mild symptoms or remain asymptomatic to develop immunity and as long as the hospitals aren't overwhelmed, Sweden will be fine.

Part of this depends on the cultural response to illness. Here, and I've mentioned this before, the absolute cultural response to being sick is to not go in. Feel vaguely unwell? You don't go to work or school. This is made easier by most being compensated (but certainly not all are covered-- gig workers, for example, fall into this category).

Are vague requests to consider "ahead of the breaks and Easter, it is important to consider whether planned travel in Sweden is necessary to carry out" sufficient to work? Again, I'm a skeptic. I'm not the only one. An epidemiologist at Karolinska (the premier medical research facility in Sweden)  noted that she is feeling gaslighted by Sweden as country- trust us and we'll take the best course. As someone quoted in the NYT article says "But I am worried Sweden will explode at some point. I feel like I’m living in a huge experiment, and I was never asked if I wanted to sign up.” Indeed.

Today's news announced a new threshold has been reached: 102 deaths now in Sweden, with another 400 confirmed as infected since Friday. The rolling 3 day deaths already don't look so good for Sweden, especially compared to Denmark. The hospitals in Stockholm are getting more crowded. 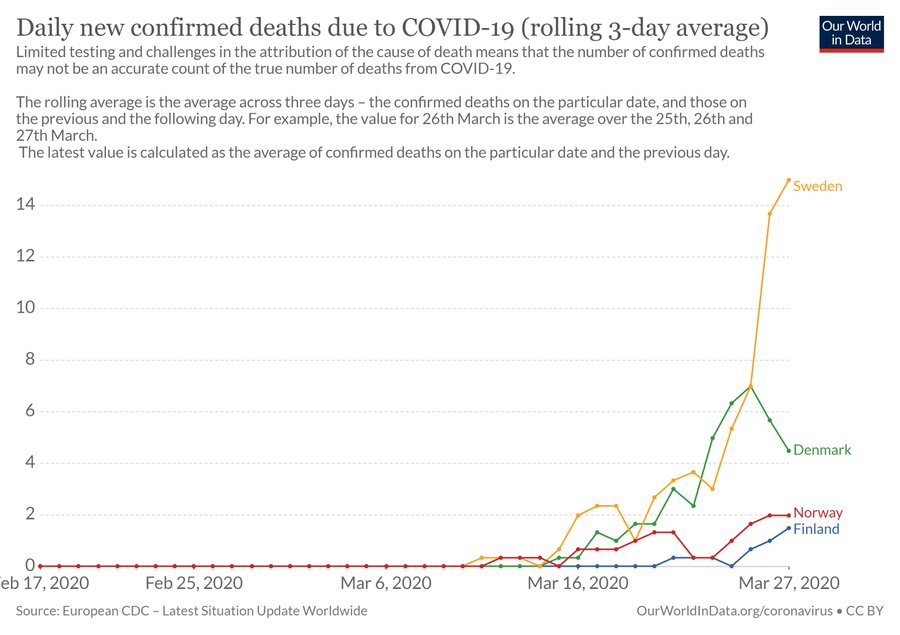 The disconnect with the rest of Europe beyond the Nordic countries is profound. In Switzerland, they tolled their 16th century warning bell for 3 minutes today to signify the country was at peril. In Germany, you can go out with no more than 2 people. Even the Brits seem to finally be paying attention.

Here, not so much. The week before Easter (6 April-13 April) is another 10 day period of vacation from school and one in which Swedes (and Norwegians and others) typically travel, often to ski. If I had to guess, it would be that at least Stockholm will be locked down to prevent travel (which then effectively shuts down the country). Schools too? Who knows- again, count me surprised that they are still open. Is Sweden's approach "lagom"-- just right, or something else?

Stay tuned for the continued saga. For now, we're still here and watching... going out to wide open spaces (we found a jump rope that we brought but forgot!!) and staying away from others as best we can. To support this physical distancing and to maintain some sanity (and after admiring someone with an electric skateboard with studded snow tires race by him in the winter ice), Chris bought an electric skateboard for his birthday- he figured learning how to skateboard was a good outside activity (and for the safety conscience among us, he bought wrist guards too). Apparently our new hobbies are skateboarding and rope jumping.

In the meantime, time to clean the apartment and make dinner- a new chili recipe from the cookbook we bought in the Netherlands back when travel was easy... perhaps this time I'll remember to use the bathroom before washing my hands again.