February 12, 2020
Immediately after Christmas, semla buns started to appear in all bakeries. These are quite the concoction: light cardamom pastries filled with an almond paste, a heavy cream, a top layer, and powdered sugar. There is approximately no way to eat these gracefully as far as we can tell. 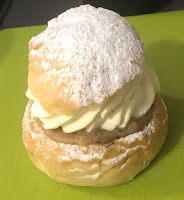 Semlor (plural form of semla) in one form or another have been around since the 1600s. Semla comes from the latin word "simila"-- wheat.  The advent of wheat flour originally meant such light baked goods were just for the rich as wheat could not be grown anywhere in Sweden except fairly far south (wheat production is still limited today). Traditionally, these would have been eaten in a bowl of warm milk. Though we've seen semlor everywhere, we haven't seen any bowls of hot milk.

These are also known as fastlagsbulle/fastelavnsbolle: Fat Tuesday buns, or the rolls eaten on Fat Tuesday, or the start of Lent. Apparently, people needed to fatten up before going into the fast of Lent. In 1771, King Adolf Fredrik died after eating 14 of these right before Lent. Eater beware!

While once available just on the Tuesday before Lent, until were then available just on Tuesdays. During World War II, sugar, cream and so on were rationed and they were hard if not impossible to get. Apparently post war, semlor became available pretty much any time you want them between December and Easter. Much like the saffron buns disappeared right after the Christmas holidays, we have to assume that semlor will disappear from the shelves right around Easter (or Lent?)

Here's one recipe if you want to try this at home: https://www.christinascucina.com/semlor-traditional-swedish-fat-tuesday-buns-semla/ 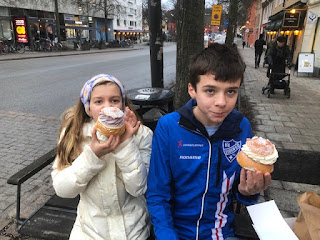