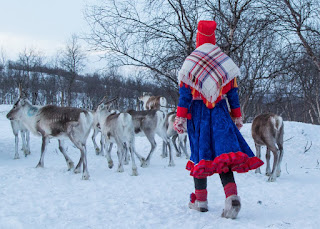 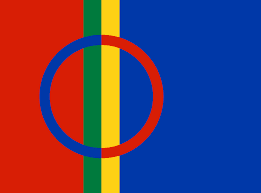 Photo (left) from Twitter. Flag to the right = Sámi flag

6 February is the Sámi National Day and this is the weekend of the Jokkmokk Winter Market. And what does the movie Frozen have to do with the Sámi? Quite a lot, it turns out. 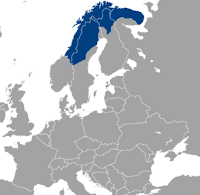 As noted by Wikipedia, "The Sámi people (also spelled Sami or Saami) are an indigenous Finno-Ugric people inhabiting Sápmi, which today encompasses large northern parts of Norway and Sweden, northern parts of Finland, and the Kola Peninsula within the Murmansk Oblast of Russia." If you look at the map, they live quite far north and have traditionally been nomadic hunters & gatherers. Today's population is about 80,000 to 100,000 people between Norway (about half the population), Sweden, Finland and Russia, with a few  Sámi in the U.S. and Ukraine. There are about 10 different languages, with 6 predominating.
While about 10% of the population today are active reindeer herders, their culture heavily depends on reindeer. Along the coast of Norway, there is a significant fishing culture. In the 1300s, bubonic plague greatly affected the coastal Norwegian Sámi, wiping out most of the population.

Over the last 400 years, like what happened with tribes in what is now the United States, there were serious efforts to "assimilate" or wipe out the Sámi, take over their land, and active work to ensure Sámi lost their their native languages.

It also seems that the 1978 controversy over the Alta Dam construction in Norway also put Sámi rights at the forefront.  A description from a course on global environmental history:

In 1978 the Norwegian Water Resources and Energy Directorate (NVE) had plans to build a dam and power plant on the Alta River in Finnmark, northern Norway, a river the Sami utilized for wild salmon fishing and reindeer herding. Because the power plant and dam would disrupt these activities and would potentially displace a Sami village, many Sami organized coalitions to combat construction efforts on the river. Some of these coalitions attracted non-Sami supporters from dozens of countries worldwide. Members of these coalitions protested the project by setting up camps and blocking machines around the construction site, engaging in hunger strikes outside the parliament in Oslo, and chaining themselves to the construction site when their original efforts seemed unsuccessful. Despite their protests, the Norwegian Supreme Court ruled in 1982 that the government had the right to construct the dam and power station, and the project was completed in 1987. However, the Alta demonstrations brought international attention to the question of indigenous environmental rights and eventually inspired the Finnmark Act of 2005, which gave the entire population of Finnmark more rights over the country’s property.

I had an interesting conversation with a member of the Swedish Foreign Ministry a couple of weeks ago. He described the Alta Dam controversy as a serious turning point in recognizing Sámi sovereignty. It took a few years, but eventually Norway, Sweden, and Finland all recognized formal Sámi governments and their own parliaments; Russia has not.

On 23 January 2020, the Swedish Sámi won an important court decision. A description from a news article follows:

The case, which has been going through the courts for more than a decade, concerns conflicting claims about who has the right to make decisions about hunting on lands traditionally used by the indigenous Sami people for reindeer herding.

"We have reached the conclusion that this Sami association, Girjas, have the exclusive right to administer hunting and fishing in the area that is contested," judge Anders Eka told AFP on Thursday at the Stockholm courthouse.

"Both in terms of hunting themselves and to decide on permits for other hunters," Eka continued.

But the court cited the association's right by tradition "from time immemorial", meaning the Sami association had proven it had used the lands for centuries.

In the ruling, which was met by applause from representatives of the minority group dressed in colourful garb, the court said the right extended to the association's entire area, with the exception of arable land, and that it could henceforth be exercised "without the state's approval". 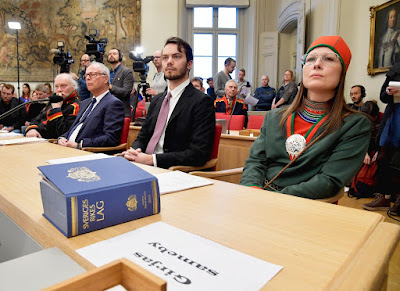 As I noted in an earlier post, death threats soon followed.

This had to have been an interesting week in Northern Sweden, given this court decision but also the fact that this weekend is the Jokkmokk Winter Market. This winter market is the oldest running market in the world at around 415 years. I thought about going up to it but was deterred by the 12+ hour train trip. Our friend Fiona, who visited us last weekend before she headed to a conference on the Arctic in Northern Sweden, invited me up again... their conference arranged for a field trip on Thursday. Perhaps I should have just gone for it!

The market is held in the winter as it is the easiest time to travel and navigate-- lakes are frozen and the snow provides a way to travel quickly. Originally a traditional trading time, the market has also morphed into a tourist destination. The village of Jokkmokk has about 3,000 people, with up to 30-40,000 visiting during this market.

And what does the movie Frozen have to do with any of this? I have the character Kristoff's song "Reindeer are better than people"going through my head as I write this. According to the co-director of Frozen I, Kristoff is Sámi and Frozen 1 was "inspired" by the Sámi culture, with Disney reps having traveled to their territory. It seems there was a mixed reaction to the first film: charges of cultural appropriation and failure to fully consult. Incorporation of traditional songs and culture were included.

As "Frost II" (Frozen II) was being developed, a much more active consultation between Disney and the Sámi took place. In an interview with the Arctic Council, Christina Henriksen from the Saami Council noted the following:

One of the reasons why the Saami Council and the Saami Parliaments contacted Disney after Frozen 1, was to make sure that our culture and our history would be presented in an appropriate way. After receiving a positive response from the Walt Disney Animations Studios, we therefore established a cooperation group, which included representatives of the Saami Council and Saami Parliaments, Saami film institutions, and legal advisors. Through the cooperation between our group with Walt Disney Animation Studios, we could ensure that things were carried out on a proper way.

This apparently includes an agreement that the Sámi would receive royalties from the film, a Sámi language version would be made and released, and a jobs training program ("We have just received 21 applications from Saami youth to become trainees in the Disney Animation Studios – this is a wonderful opportunity for our creative talents.").

Finally, when asked if a movie can raise awareness about Indigenous peoples, Christina Henriksen noted the following:

Yes, I think after making the movie Moana, in which Indigenous cultures of the Pacific were displayed in a contested manner, Disney may have realized that involving Indigenous peoples from the beginning might be a beneficial working method. These movies are a way of telling our stories – although they obviously are fictional. Frozen 2 is not necessarily a story from Sápmi, but through our cooperation we could ensure we were not culturally appropriated.

As I've learned about all of this, I'm pondering the challenges faced by Indigenous peoples, and the similarities. As a lawyer, the language of hunting and fishing rights from "time immemorial" is the same language used in U.S. cases protecting tribal rights to hunt and fish. In Finland, the Sámi parliament requested and was granted the ability to set up a Truth & Reconciliation Commission in Nov. 2019; Canadian First Nations have had such a commission for a while. Sámi language is now taught in northern schools, and can be studied in the universities. Indigenous rights have been recognized in courts. There is a long way to go, but a lot of progress towards at least recognizing Indigenous rights in this region.