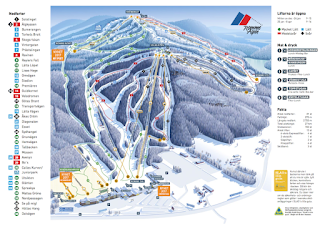 The biggest event of the year for my school happened on Friday for the middle school kids. My classmates had started talking about it at the beginning of the school year- a ski trip to Romme. We received all sorts of instructions about how the trip would go from a teacher who had never been on the trip, including how we'd have to be "tested" on a bunny slope on whether we could ski. However, only the kids who had skied before were supposed on the trip-- so we convinced her to drop the bunny slope ski test and just let us ski once we had our passes.

The day of the trip came. The school organized 2 buses of kids to leave the school at 6:30 AM, drive 3 hours to Romme (north of Stockholm) where there was a bit more snow, though not much. Temp were 11 Celsius while we were skiing.

On the bus, I talked with my friends Douglas and Isaac and ate snacks. When we arrived, there were like 40 other buses with kids for not the biggest ski hill ever. It took like 10 minutes to get our passes on, then we went to the rental place. We'd pre-ordered our gear, so I picked up my gear in a few minutes. We stored our extra stuff-- hard in such a busy place.

I found my friends who were looking for me- I was supposed to call them but hadn't yet as I'd just finished getting my stuff on.

We took the lift up together to the "double blacks"- actually not that hard in comparison- more like a regular black diamond run in the U.S. For those who have skied at Mt. Tussey, the hardest run was sorta like Tuscarora.

So we did this one a couple of times, tried a couple of other runs that weren't too hard. Most of my classmates knew how to ski, but not so well... some have a different style (fewer slalom turns, more bombing down the hill with not much turning). It was super crowded at the bottom on the green hills, but the lifts that shuttled around the black diamonds were much less crowded.

We skied from about 9:30 to noon- then went to the bottom to each lunch. I took my bagged lunch up the tow lift, which stopped about 1/2 way up a black diamond slope for 15 minutes. I almost fell off a few times but we finally made it- then took a lift up to the best place to eat, which also sold waffles for lunch. My friends ate waffles while I ate squished sandwiches with exploded tomatoes & carrots... the skittles were the highlight. Everyone else seemed to have bought their lunch- once everyone bought their lunch, we ate quickly, then found more people from our class to ski more.


The snow was all manufactured- not much in the trees, wasn't great snow. We had fun anyway- had lots of skiing. We had to get back to down by 3 to turn in rentals and get back to the bus, which left about 3:45. The bus driver spent the day skiing as well- he wanted to get out before all the other buses left so we didn't get stuck in a long traffic jam.

We had a loud bus ride back- ate some more snacks, talked, watched people play video games- normal 8th grade stuff! I was tired when I got home from a long day of skiing, but I'd take a day of skiing any day (though the alternative would have been playing hockey at our nearby ice skating rink- not too bad either).

That concludes the adventures of skiing in Europe, at least until we go and ski the vasaloppet, the biggest cross country ski race in the world, and then go alpine skiing in the Alps.