Politics from over the pond: pondering recent events and what one person can do 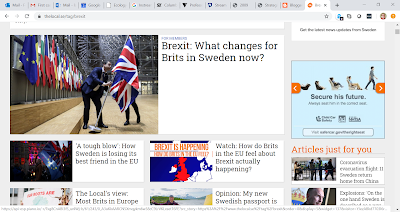 I know that Friday was a big day in politics in the U.S., but it was also Brexit day in the U.K. It was interesting watching the local news- which was all about Brexit and not much about the U.S. (I was watching the Swedish English news sources).

Hard to describe moments like Friday when one feels remote and separate from one's country, but also pondering what can be done with what seems to be a global phenomena of strife, anger, treating the "other" as different.

Here in Sweden, one of Stephen's teachers is British... in our student/parent/teacher conference on Friday, he didn't know if his passport to teach in Sweden would be good in a year. A friend from college visited over the weekend- she is Canadian and currently lives in Cambridge, England. She wasn't sure of travel to the rest of Europe going forward and isn't sure whether her Spanish boyfriend will be allowed to stay in the UK. She noted that a lot of her colleagues had left the UK for other places given the uncertainty and unknown. Lots of unknown ramifications affecting real people.

As a law professor watching the U.S. from afar, I'm struck by challenge of maintaining democracy (small "d") when what is supposed to be our system of checks and balances (the judiciary, the executive branch, the legislative branch) was just eroded. Did we just put King George (pictured below in a portrait hanging in one of the Swedish palaces) back in charge? On the other hand, a lot of historians have remarked that over the longer term, the U.S. populace has responded to consolidation of wealth and power in powerful ways. I take some hope in this and have been contemplating what I can do from afar. Beyond the election cycle, what can we do rebuild civility, engagement with each other, honest to goodness discussions versus fear and hate? 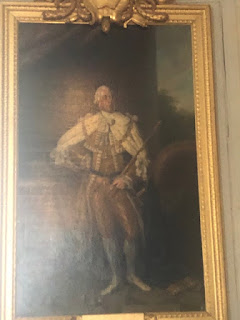 Again, this isn't just a U.S. or Brexit issue. The rise in populism and anti-immigrant sentiment is alive and well in Sweden too. Through about 2015, Sweden had a fairly open door policy for allowing in immigrants and/or refugees. The population of foreign born in Sweden jumped over the last two decades. According to Chris looking at Swedish statistics, there were about 65,000/year new immigrants coming in until 2005; then 100,000/year until 2011, then a peak of 160,000 in 2016. In the year 2000, approximately 10% of the Swedish population was foreign born. In 2020, this jumped to nearly 18% foreign born;  this a population of 2.3 million people of a population of about 10 million total.

In 2015 and 2016, colleagues reported a challenge of navigating the central train & bus station, which was taken over by impromptu refugee camps.

This influx of people has led to quite a backlash against the immigrant population, with accusations that crime is related to these newcomers. In the 2018 elections, the very far right Sweden Democrats took a number of seats in Parliament; in December 2019, they reached a "record high" in opinion polls-- up to 22.6% (making them the 2nd largest party in Sweden).

There is a sizable debate about what it means to be "Swedish." Must one have blue eyes and blondish hair to count? This has shown up in places like selection of who can be a "Santa Lucia" girl- at the kids' school, both girls chosen to be the lead singer for the Santa Lucia fest in December were both originally from India. This seems to be unusual. We also just received notice from the kids' school that any kids with permanent residence status must be enrolled in Swedish classes starting next fall. Not sure what to make of this one- on one hand, perhaps useful to ensure that permanent residence do learn Swedish (we can attest that it's hard to do given how much people speak English), but on the other hand, I distrust where this requirement might be coming from.

In January, the Swedish Supreme Court awarded the indigenous Sámi in Sweden (reindeer herders who live in Northern Norway, Sweden and Finland) the right to manage fishing and hunting in their traditional herding grounds. The response has been intimidation and death threats.

I don't know what to make of all of this but it's been heavy on my mind. It's also an interesting time to be based at a Department of Peace & Conflict, where lunchtime discussions trend to what we're seeing in the world. I had an interesting discussion with Peter Wallensteen last week. Peter helped form the Department in the 1970s as a way to build more systematic study of peace & conflict trends. He said that the use of mediators- neutral third parties helping others have discussions-- seems to be decreasing. Yet given global dynamics, this is an area where we seem to need more help.

Another discussion within the Department-- an example of mediation and Ukraine-- actually gives me hope. A visiting scholar at Uppsala, Tatiana Kyselova, from Ukraine mentioned that their revolution has actually awakened mediation as a tool- she called mediation a "sleeping beauty" that awoke as people realized no one was going to save them and they needed to help themselves. The mediation community has been organizing and figuring out how it wanted to operate when the new federal government tried to instill new rules. Her post on averted takeover of the mediation system is  how the mediators of Ukraine united to block these new draconian rules... using youtube and a lot of grass roots organizing. If it can be done in Ukraine, we can do it in wherever.

As I work on water and environmental issues, climate change is of course an issue... in a fit of frustration as the mediators in the US decry our avocation losing ground, I wrote a blog post on how mediation & climate change go hand in hand. This blog post is part of a larger "theory of change" online symposium about the future of the dispute resolution world; a full list of posts is online at this site.

Where does this leave us? In a world that is both large and small. In a place where connections can be forged and broken. Perhaps in a place where we all need to realize that no one is here to save us, so we need to do what we can to save our collective selves...

With these musings, it's sunny in Stockholm-- time to go outside.