Consider this part 2, or maybe part 3, of my posts about getting a doctorate in Sweden (part 1 is here)

As I noted in my post about Valentine's Day yesterday (part 2), I attended another doctoral defense at Uppsala. I'm still pondering just how different a Swedish doctoral defense is. Yesterday, Anni was grilled by her "opponent" for more than an hour. Just when I would think he was wrapping up his questions, he'd ask another. And another. They actually had a great conversation about her work, with her apparently calm and collected the whole time.

After she finished, the chair of the department (who was helping orchestrate the defense) announced that her grading committee, advisors and the opponent would meet elsewhere and discuss whether she passed (with her grade of pass/fail to be hung up outside the faculty common room door). In the meantime, Anni was greeted by many well wishers, which must help distract.

Like with the previous doctoral student, I can't imagine a) working this hard to prepare a dissertation then  having someone else present it, b) waiting for my grade to be posted for the world to see, and c) planning what is effectively a wedding reception afterwards. This isn't unusual; see for example, this other blog post about it. I finally asked a colleague what would happen if someone were to fail. She said they don't get to this point without being pretty sure the person is going to pass.

The afternoon passed and the noise from the lunchroom built over time. I put down the work I was doing and went to investigate- no Anni in sight, but plenty of grad students, faculty, and staff well into the champagne. And well dressed up... heels, glitter, fancy dresses, suits. I'd worn a suit, which I don't do most days (nice pants and a sweater suffices for work). The saying is that Swedes dress down for work, and dress up for parties. Indeed.

6:25 PM, and people gathered up to walk over to the Småland nation.

What is a nation, you say? Uppsala University is one of the oldest, if not the oldest, university in northern Europe, founded in 1477. (I digress for a second: an early notable professor is Carl Linnaeus in 1741. Linnaeus is credited with creating a classification system for plants). Anyway, in 1477 or 1741, it was a) unusual to actually attend university, and b) not easy to get to. Students from different parts of Sweden tended to live together. These groups of students were eventually recognized as "nations."

The Småland nation, founded around 1645, had students primarily from the Småland area of Sweden. Apparently, this is the regional name- there are two towns in the area which had agreed not to use the Småland name. A rivalry ensued when the nation took Småland for its name, leaving its rival town to use the town name. Not entirely sure it makes sense to me either.

In 1663, the university tried to get rid of the nations, but no luck on that. So they assigned an "inspector" to each nation to make sure the students behaved. According to one of my Uppsala colleagues, the inspectors once upon a time could hang students for bad behavior. Not sure if true or not. They also mentioned the nations have graveyards in case students died while at school.

Today, the nations are actually run seemingly as businesses aimed at bringing students together, no requirement to actually be from Småland. Småland nation itself advertises its byline at "Commitment, love, and so much dance." They have a pub, a choir, quiz nights, housing, etc. They also give scholarships; a number of grad students have been able to attend conferences given funding from Småland nation.

Anyway, 6:35, we arrive in the Småland nation complex- really a block of buildings that includes quite a bit of rentable common space, a dance hall set for the dinner, student housing, a bar, etc. We worked our way through the complex to find the right space. Found it: checked coats and bags with a bag check, gathered in the foyer. The space felt like it wanted to be fancy, but also had a slight frat house vibe-- like a lot of parties had taken place here and the walls bore witness to more than they'd wanted to see. 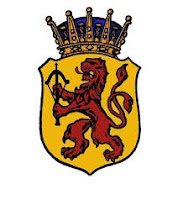 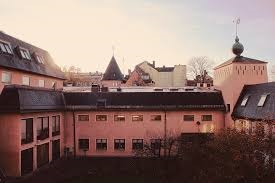 [Not my photo, but gives you some sense]

Champagne laid out for all. People gathered, chatted. Two grad students were the masters of ceremony for the evening. They eventually announced that if one was interested in "snaps", one could buy tickets for it before heading upstairs. The sign on the wall announced that snaps were 40 swedish kronor for 1 ticket, and each person could buy no more than 3. I eventually figured out that "snaps" referred to some sort of alcohol- shots, perhaps? According to Wikipedia, "snaps is a Danish and Swedish word for a small shot of a strong alcoholic beverage taken during the course of a meal." I don't drink much these days, but decided when in Sweden, do as the Swedes do and bought 1 ticket.

7 PM. At the invitation of the evening's masters of ceremony, all ~60 people tromped upstairs and looked at the map to figure out where we were sitting. Large room with serious looking portraits- the inspectors. 3 long formal tables, elaborately set. Name tags on the table and instruction book laid out (entitled "agenda, procedure, fine-print"). 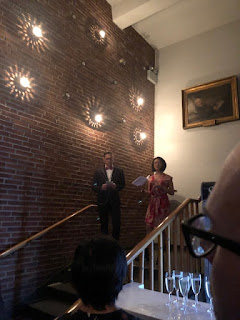 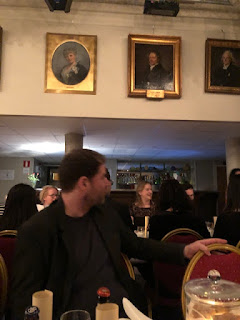 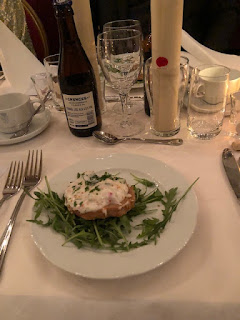 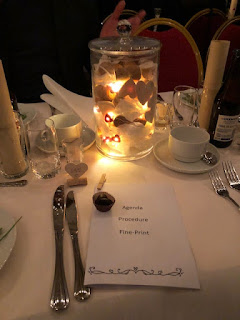 The "agenda, procedure, and fine print" was quite helpful... including the agenda (eat, drink, sing, socialize, enjoy) and detailed instructions on how to toast. My name tag included a heart. 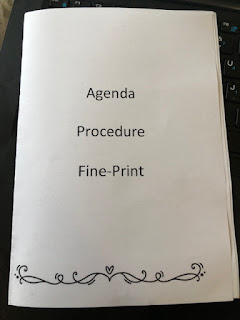 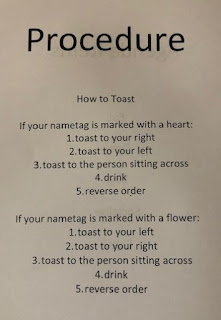 The menu was also rolled up, looking like a parchment document in our water glasses. When unrolled, we realized that Anni had set out a contract for us to sign. 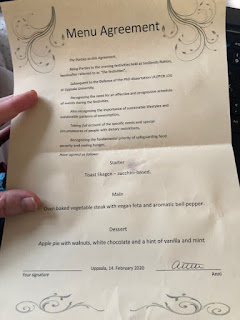 A bit hard to read, but it reads as follows:


The Parties to this Agreement,
Being Parties to the evenings festivities held at Smålands Nation, hereinafter referred to as "the festivities",
Subsequent to the Defence of the PhD dissertation UU/PCR.120 at Uppsala University,
Recognizing the need for an effective and progressive schedule of events during the festivities,
Also recognizing the importance of sustainable lifestyles and sustainable patterns of consumption,
Taking full account of the specific needs and special circumstances of people with dietary restrictions,
Recognizing the fundamental priority of safeguarding food security and ending hunger,
Have agreed as follows:

We settled in. The waiters circulated around, offering "snaps" in exchange for a ticket- our choice of aquavit (like grappa for those who have been to Italy, or in the vodka family). This was to go in the far right glass, not to be left lonely by the several other glasses (champagne, wine, water, beer). 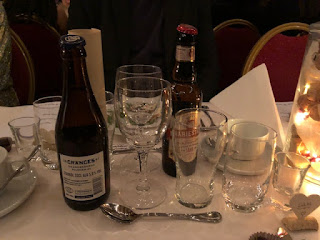 Our masters of ceremony started off- a welcome, then a toast from Anni's main adviser. Then a song- words provided in the "fine print".  Apparently a very traditional first song for a seated dinner- the very famous Swedish drinking song- Helan går. Here's a link to Swedes singing it (not at the dinner). More food, more toasts- next adviser. More drinks, more songs. Another toast from Anni's former roommates. I had told Chris I'd hope to leave by 8:30... I looked down and realized it was now 9:30. 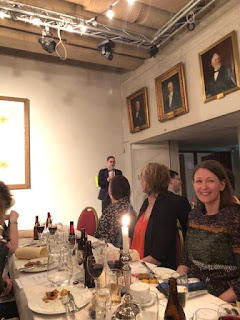 Dinner over, more songs. The masters of ceremony called for a break. The grad students scurried around, with much activity behind closed curtains on the stage.

They then performed a cute skit where they pretended that a grad student playing Anni was leading a climate negotiation between Cupid (it was of course Valentine's Day- he wanted it HOT) and Santa Claus (worried about the melting Arctic). Hard to see from the photo, but definitely replete with inside jokes about fair processes and justice related to climate (the topic of Anni's dissertation). 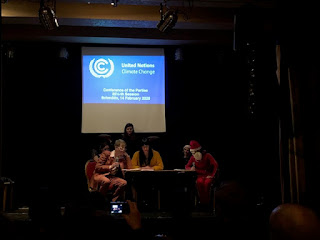 Plenty more laughter. More toasts. Somewhere in there, my colleague Ashok asked what train I was taking back to Stockholm. Looked quickly- 11:12 PM would work (it was 10:15 PM at that point- no problem, right). Things finally wrapped up with a song that involved people standing on their chairs-- once finished, you were not supposed to sit down again so they could clear the room. Dancing was scheduled to go until 3 AM.

At 10:50, I ran downstairs, retrieved my coat and bag from the cloakroom, and walked briskly through a Friday night in Uppsala. Made it to the train station with 3 minutes to spare. No train. Checked again- had bought a ticket by accident that was leaving from Stockholm at 11:12. Cancelled the ticket I bought. Figured out another slower train was leaving in 15 minutes. Got on, dodged the vomit, found a seat. Texted Chris to let him know. A solid hour of Swedish practice on duo lingo. Rather than going to the central station and biking home across Stockholm at 12:30 AM, I got off on an earlier stop, taking a bus home. No need to face potential (likely?) drivers who had been drinking.

All in all, an eventful evening. I hadn't been sure I was going to go at the last minute- a sinus infection meant I didn't actually feel that good. But Chris noted- when do you get to go to a cultural event like this? The whole day was an interesting lesson in how students get socialized: what does a dissertation defense look like, how is a celebration done afterwards? Also impressive to me though is that it wasn't just faculty or students attending- most of the staff attended the defense itself, and many attended the dinner. Count me impressed about a department that really seems to care about a student's success and all of its members were thrilled to celebrate it.

Also interesting to see what's a very Swedish dinner/celebration. Rounds of songs, rounds of drinks. In trying to explain the many songs to my family, I found an entire album of Swedish drinking songs (svenska snapvisor) on Spotify (Spotify is a Swedish company, so not surprisingly, there is easy access to Swedish music in one form or another- we have a favorite album about saunas).

While the noise level rose as the evening went on, it made me ponder drinking. Alcohol in Sweden is also a really interesting topic. We've talked with more than a few Swedes who basically said- oh, I can't have more than 1 beer because I'm driving. The pressure to not over drink and drive is really strong. Apparently a Swedish minister of some sort was in Denmark, drank 2 beers, was pulled over in Sweden, and resigned out of embarrassment and public outcry. If you go to the store, it is as easy to buy alcohol free beer as that with alcohol.

However, the expectation to drink heavily was strong at an event like this (but a limit on 3 snaps tickets). There was plenty of beer and wine going around. I have no idea how many rounds of toasts there were. I worked on a beer and my one glass of snaps over several hours- a sinus infection doesn't encourage over indulgence. A colleague who doesn't drink put water in their snaps glass. Other colleagues noted that a number of key Swedish events (Midsummer, the traditional crayfish parties in August, etc.) center around songs and snaps. It may be that the pressure to drink is strong, and the pressure to not drive is even greater. There are always a lot of taxis in Stureplan, the hot spot for Stockholm night life, and I'm sure more last night.

Anyway, all of this meant I didn't want to bike across Stockholm at 12:30 AM on a Friday night.  Chris managed to stay awake until I made it home...  both of us bemused and continuing to be curious about what we might find next in the way of Swedish traditions.