Jag fyller år i januari = my birthday is in January! 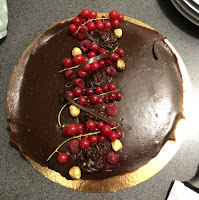 January is birthday season in our household, with this year being a big one for birthdays. Up first, Linda Fowler celebrated her 75th birthday on 5 January. Up next, Frances Fowler (Mimi) celebrated her 100th (!!) on 7 January. We talked about joining the family celebration for Mimi in New Hampshire but couldn't quite make it work- sorry to miss the festivities, which sounded like they went well! A family brunch and an open house where Mimi lives, lots of family and friends visiting.

My birthday is 15 January and I turned 45 (Att fylla halvjämnt = to turn half even). A mid point in many ways. We're halfway through our time in Sweden. The season is turning away from darkness and towards light. The Swedes assured us that the temperatures would drop in January, but no such luck. The gray, lack of snow, and importantly, distance from friends has been a challenge for me. When asked what I might do for my birthday, I noted that I wasn't sure who we'd invite for a party (not quite true- we do actually have a few friends here).

I had a quiet day working, making donations to causes that I care about and thinking about the world. Chris' parents called and asked what Swedish traditions surrounded birthdays- as apparently the family researcher of holiday traditions in Sweden, I hadn't gotten to that yet. 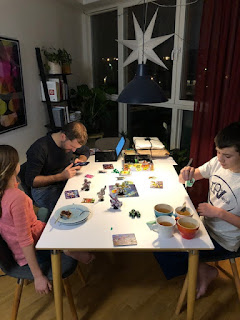 Everyone arrived home from work and school, Chris with a birthday cake he picked up from our favorite bakery. He biked it to work, then home (intact). We went climbing at the local climbing gym (fun to have happy birthday sung as you climb a wall), took a sauna, and had dinner. Funny that the best place to eat in our neighborhood is a quite good restaurant at the climbing gym! Elizabeth kept checking the time, wanting to know if it was 8:30 PM our time. We ambled home, enjoyed a fabulous cake (pictured up and left), and started playing our new favorite game- King of Tokyo.

Chris set up his computer and zoom- a program widely used in the academic circles for interactive meetings (think Skype, but people can call in themselves). Around 8:30, ding... our friend Mark Berry appeared on the screen. A few minutes later, my dad and Char. Over the next 1.5 hours or so, we had a lively set of people from all over the U.S. call in for a quick happy birthday. Chris had quietly arranged for a surprise party via zoom... awesome and so fun to talk with everyone. I also received a raft of emails, texts, and calls which was also awesome. We realized that we (particularly I) should be connecting with people more not just for work, but to catch up... so this is an open invitation to join me for a cup of tea and a chat! Turned out to be a great birthday present for someone a long way from friends and family-- thank you.

In the meantime, I did manage to research Swedish birthday traditions. Not surprisingly, there are quite a few. The simplest is that kids are woken up on their birthdays with cake and presents in bed (frukost på sängen = breakfast in bed). There is of course a happy birthday song- a sanitized version for kids and a no-so-kind version sung more frequently for adults. Lyrics below. There is also the Swedish Chef's birthday version if you need more muppets in your life (not actually Swedish).

A traditional birthday cake would be a "princess cake"- an example picture below and recipe online here. This cake is everywhere-- every bakery offers one for sale. Layers of sponge cake, cream, marzipan, raspberry and more. Too much cream for me but they are quite lovely to see.

Also apparently a tradition (perhaps in small towns?) is to post a notice in the paper- noting a birthday, inviting people to a big celebration (40, 50, 60 birthdays, for example), or notifying people that there would be no celebration. For the big birthdays, tradition is to hold a large open house and prepare for a lot of people. Celebrations at work or school mean the celebrant brings the cake for others to enjoy. It's also a day you get to raise (or "hiss") the Swedish flag for yourself...

Historically, people didn't necessarily know when they were actually born, so people would celebrate their "name days"-- a day of the year designated for their name. Who knew but the name day for "Laura" is January 15th- so I learned from a colleague at Uppsala the day after my birthday. The Swedish Academy sanctioned an official list of names in 1901, and updated it in 2001. For more on the name days, see https://www.behindthename.com/namedays/country/sweden.

As for the birthday song and lyrics, here's the kids' version (sung by funky puppets: (https://www.youtube.com/watch?v=Nia0BVVMnCw):
The "hurra, hurra, hurra, hurra" sung at the end signifies the following: "The reason we say this four times comes from the 1600’s, when war ships needed to identify which country they belonged to. Sweden had the code 2 canon shots. When the King was present this was doubled, hence our 4 “hurra” today."

The longer and adult version is a bit more bleak.

So there you have it and now we know how to celebrate birthdays a bit more.