January 01, 2020
Back in Sweden for new year's after another day of cross country skiing (flat light + fog = not so fun skiing), a day poking around Lillehammer, and a travel day for Linda and Steve back to New Hampshire on Sunday, 29 December. 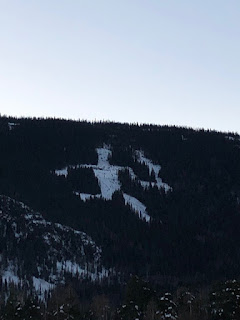 After dropping them for their train to Oslo, we loaded up our stuff and went alpine skiing at Hafjell, site of the 1994 Olympic alpine venue (Olympic torch dude carved out of trees on the mountainside). I think we were expecting steep slopes given the area's use for the Olympics but it was much tamer than we expected-- a number of lifts that went up half a rather flat slope, then a t-bar or additional lift further up. It took 3 sets of lifts or t-bars to make it to the summit. An inversion layer up top meant no visibility at the highest elevations, much like our challenging x-c ski day on Friday... but good snow. It took us all a bit to get our alpine skiing legs under us, especially since Chris and I are used to telemark skiing and haven't been on regular alpine gear in nearly 20 years. Fun to be flying down the mountains once we did figure out the more interesting, less crowded, slightly steeper routes. Spent the night in a nearby hotel and awoke to the most amazing Norwegian buffet breakfast ever.... something for everyone in a fantastic breakfast. 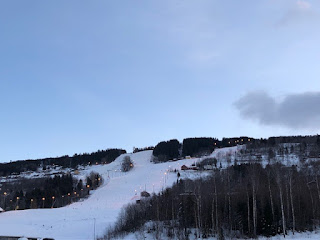 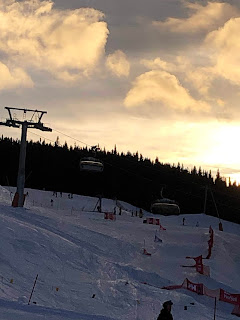 30 December dawned clear for a great view all around and warmish temperatures- we skied until we couldn't any more, did some fun "races" in a little 30 second video race area, stopped for a waffle and snack, finished a few more runs, dropped our rental skis, then headed out in our rental van back towards Stockholm.

Chris (left), Stephen mid race (right), and Elizabeth at the end of the do it yourself race. 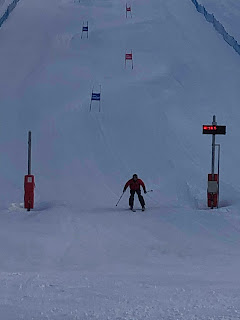 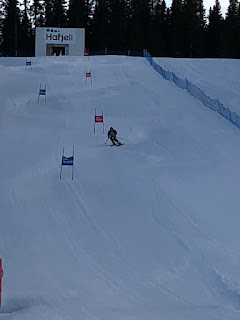 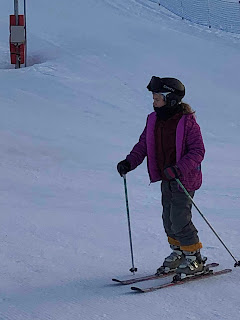 Mid-slope waffle shop. (bronost =brown cheese & waffles = tasty to me. I'd forgotten about brown cheese! It tastes like caramel). The kids elected for strawberry jam. 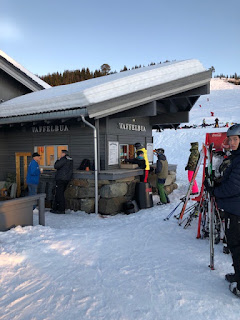 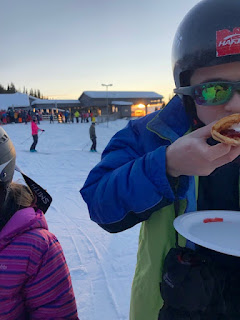 Sunset (at about 2:45) and truly funky clouds 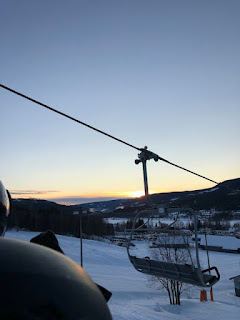 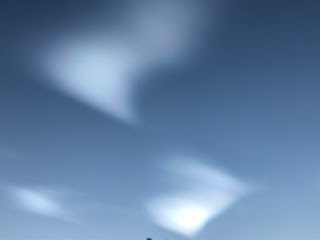 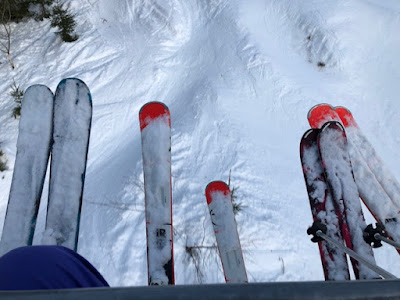 A few minutes out of the parking lot, I suggested that maybe instead of heading straight back to Stockholm, we head due east and ski in Sweden before heading south to Stockholm (where there is definitely no snow). Chris scrambled on the mapping software, looking for both potential places to ski and places to stay. For you see, while Lillehammer and other ski destinations might have been quiet during Christmas, we were now in peak tourist ski season- with thousands of people skiing. We waited in quite a few ski lines and places to stay were quite limited.

Apparent luck: if we headed east, we ended up in Sweden's Dalarna region, the Scandinavian "paradise of skiing" or something like that. It would add only 30 minutes of extra drive time in our overall 8 hour drive time home, and allow us to explore a part of Sweden we had yet to visit. The description of this area sounded great; you can read a breathless description yourself: "Sälen is one of Sweden's best-loved resorts, consisting of four ski areas: Lindvallen, Högfjället, Tandådalen and Hundfjället. Enjoy 100 slopes in all directions and an extensive snow system that guarantees great skiing all season long. Most Swedes have visited Sälen at some point in their lives. The village, Sweden's most famous ski destination, is in the Dalarna region close to the Norwegian border. The mountains roll across the horizon and the views stretch for miles upon miles." Sounds great!

Chris eventually booked a place to stay and helped me navigate the now back country roads, crusty with ice patches and narrow lanes, towards our new destination. Lights flashing ahead, we slowed... all the many "watch out for moose" signs came true- a real moose loomed large the icy dark field to the right of the road. Cool to see, especially as it wasn't actually on the road. They are BIG!

We kept driving, and driving... what we thought would take us 2.5 hours eventually took about 4, to arrive at what we thought was the "cabin" we rented from a local bed and breakfast in the town of Sälen. This required navigating a pure sheet of ice- the warm day had melted the snow and turned the driveway into glass. Turned out we were in the wrong place- the owner had two locations and we'd mistaken the address... inched back down the ice, onto the main roads, and up into the ski area 9 kilometers away.... ice all around again. Took 3 texts and calls to find the proper lock box and our accommodations: half a cabin in a large complex of "cabins" that looked like vintage 1960s, but with cheap constructed materials of modular homes from today. Clean. Beds. make your own bed. Someday I'll write a novel based on this place. For the night, we were just glad to stop driving across patchy roads and icy driveways. 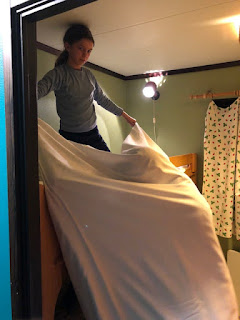 We woke up to solid winds and ice everywhere... Chris went out to scout and found the cross country ski trails not groomed- though he found a 10 km loop with little cutoffs, he describes the snow as hardened ice with roughness from a day of melt and skiing. He did find the alpine area: t-bars taking alpine skiers across the flats (?) to the base of the mountain. Redeeming about the day was the beautiful clear light. We were seriously surprised at how not appealing this area looked to ski despite the sunshine. This is especially weird as the cross country ski trails are home to Sweden's largest cross country ski race in February (see paragraph below) and this was a massive holiday week for skiing. Why on earth would you not groom the trails?

Giving up on the idea of skiing, we loaded up the van again, and headed across the country back towards Stockholm. Normally our jaunts of serendipity tend to work out well- this is one of the first that was a lot of extra work and no benefit (except seeing a moose in the dark). We did get to scout where the Vasaloppet cross country ski race is in February- the largest ski race in the world with more than 90,000 participants. Helpful to see the terrain as my dad, Stephen and I are signed up for the Kortalopet (the short race- just 29 kilometers instead of the full race at 90 kilometers).

Long drive back across a pretty country side- home of the famous Dalarna horse (for at least 200 km in any direction, apparently). Dalarna used to be a mining region and has been remaking itself as a tourist destination. Chris has promised a blog post about Swedish geography, particularly farming fields and rocks. I'll let him add a picture of the famous horse.

The snow faded quickly as we drove. 5 hours later, nice to be in Stockholm again. We offloaded our van and Chris and the kids shuttled our stuff up to our apartment while I drove the van back to a drop off place near our neighborhood- no problem finding the local Hertz return, but they had 3 potential parking spots, 2 full, and 1 not quite big enough for a 9 passenger van. The instructions said if you don't have space, park on the street. Great. Not sure what is legal or not. It's now 31 December and Stockholm is in party mode, not park-a-big-van mode. I block taxis, passersby, etc. while I try to navigate the too-small space with a too-big vehicle. A call to Hertz at the airport suggests maybe the other downtown location might be open. Nope. A call to Chris, who agrees to bike over and help me navigate the big van back into the too small space. It works (just barely). Better than an extra 40 min. drive to the airport, followed by the hour public transport home. 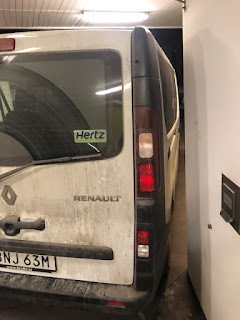 He rents a scooter and I take his bike (and his gloves). Frigid, we arrive home for some clean up, dinner, some games and a wait for the new year's festivities. How long until midnight? A while...

While I had proposed that we go to Skansen, Stockholm's open air museum, watching the broadcast on Swedish tv seemed to be the wiser move. We'd seen loads of places selling fireworks all across Sweden- and fireworks started around 8:45 PM in various places- our local neighborhood, across the city. At 11:10, we tuned into the broadcast: "Twelve strikes from Skansen." Description below:

What to say? It looked like a big crowd had turned out for the part musical review, comedy show, talk show, and Swedish version of Alfred Lord Tennyson's poem "The New Year's Clock." The reading of the poem is apparently a Swedish tradition. The rest of the musical revue? We had no real idea what was going on, but it is quite clear that all of Stockholm had a great big party last night- glittery sequins, fur coats, high heels and mittens galore.

Today - nobody stirred until about 11 AM. No buses, no pedestrians, no lights, nothing outside. A quiet day with even some light- we went ice skating at our nearby public rink (5 blocks from our apartment) where there were actually people out. A good day for trying our hands at cardamon buns (4 tablespoons of cardamom?!), movie watching, laundry and a chance to catch our breath a bit. Kids are out of school until 8 January, so time for a bit of a "staycation" as we remember what we left. 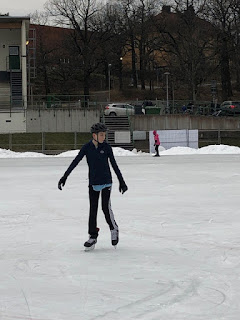 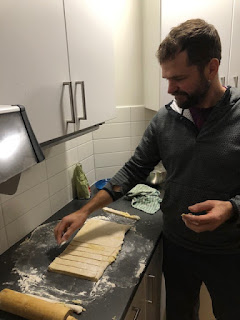 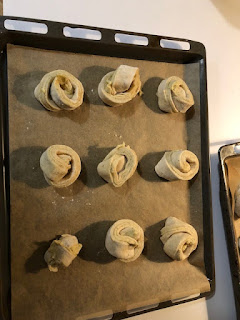 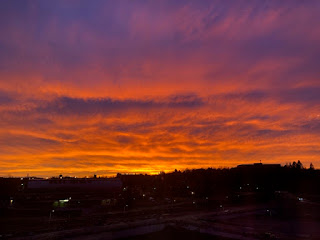 No deep reflections yet on the year or decade past, or even where we are right now- the year and decade ahead promise to continue as a wild ride. More time in Sweden this year, then a return back to Pennsylvania. For the decadal scale, 10 years ago, we had 1 kid and another on the way. 10 years from now, they'll be 22 and 19. Gulp. Wish us luck.

In the meantime, best wishes to all for a gott nytt år, a good new year. May the light return quickly.