Viaje a la España. A trip to Spain for Thanksgiving

[A few notes, first: The days and weeks are going quickly, but I'm on a long delayed train home from Roskilde, Denmark to Stockholm, Sweden, so clearly I need to write about our trip to Spain. Another note- I think that photos aren't working so well on the emails that come through, so I will try to simplify how I post them. This post is wordy, but I'll post the next few as mostly pictures].

For Thanksgiving, we went to Spain. 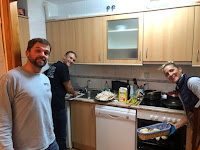 More than 20 years ago, Chris and I joined our friends Annie and Colter for Thanksgiving in Berkeley, California. As we’ve all moved from place to place (Portland, Seattle, and State College, PA for us), and Berkeley, the Bay Area, and Salt Lake City for them), we’ve managed to have Thanksgiving together.

That first year, an entirely inane and apparently durable tradition developed: 10 push ups by everyone every hour, all day long on Thanksgiving. Out shopping and it turns 10 AM? Drop and do 10 push ups in the grocery aisle. Baking a pie or setting the table at 11 AM? Another 10 pushups. Eating Thanksgiving dinner at 4 PM? Leave the table, 10 more. We are willing to guess that at least a few readers of this blog have been subject to our entirely internal family tradition (and several of you emailed us photos of you on Thanksgiving day, down doing push ups). You are welcome. 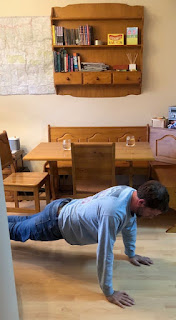 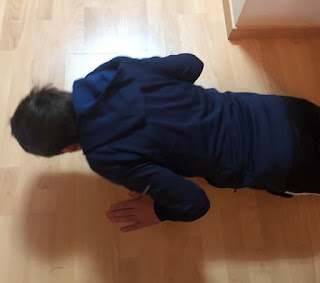 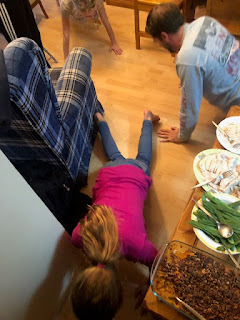 Anyway, back to our trip to Spain. This year, Annie and Colter plus their two kids, Carson (soon to turn 13) and Fisher (9), are living in Jaca, Spain for a few months, then France starting in February. I think we were all bemused to learn that we’d be in Sweden this year, they in Europe one way or another. While it didn’t work to join them for canyoneering in October, it did work for us to join them for Thanksgiving.

Thanksgiving is notably NOT a Swedish holiday. The kids had school; however, we pulled them out of school for a few days for our field trip to Spain. We promised that they would have an educational experience and brought their schoolwork with.

Packed up our stuff, unsure of the weather but sure we needed raincoats, we threw in our climbing shoes & harnesses, layers of clothes, and some frozen cranberries (for sale in Sweden, not so in Spain). Walk to the kids’ school, walk to the subway, subway to train to plane. Our flight from Stockholm to Frankfurt was delayed by 40 minutes, making a 45 minute connection untenable—however, we were delivered from our plane to a bus to our next flight (helpful to have 16 people headed to Barcelona on the same flight).

Made it to Barcelona, rented a car, remembered how to drive a manual (mini-van), and worked our way carefully out of the parking garage. Chris navigating, me driving. Heck of a way to relearn the stick shift! Some day we’ll come visit Barcelona for real, but we were in a hurry to leave it… 3 hours, 33 minutes later, we’d traversed out of the urban area, through a lot of industry and farm country (stinky in the dark), into the mountains, through some more industrial zones and a lot of roundabouts, and into Jaca… turned off to see Colter in his pajamas waving at us. We felt like we must have crossed out of a massive city, through Montana (empty, open, cows), through the mountain passes west of Denver, and somehow into New Mexico near the mountains. Of course, this is what it felt like- we couldn’t see much of anything.

[I wrote the above on the flight back from Jaca. Fast forward to it being December and a lot of time has passed. I’ll see if I can do the rest of our Spain trip justice, but in a perhaps less long winded way!]

Jaca (pronounced more like Chaca with a guttural Ch) is right on the edges of the Pyrenees. So cool to wake up to the edges of a steep incline peeking out of the clouds (though nothing to what we saw later with the full view of the mountains). Thanksgiving day dawned brighter and earlier than in Sweden- I think that Colter and Annie though we were crazy every time we saw the sun (they thought it was pretty overcast and grey, but we assured them that they had lots of light. I think we convinced them not to visit Stockholm in November). 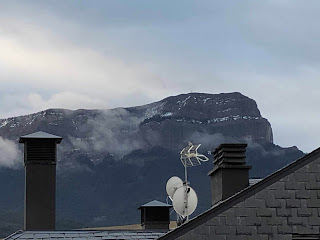 Their kids had school and had arranged for our kids to join them for part of the day. Headed into the trip, our kids were not so sure of the idea that they’d skip school in Sweden to go to school in Spain, where they don’t really speak Spanish. However, Fisher & Carson were super excited to show off their school. Post-breakfast, Annie and I walked Elizabeth to their school and met up with Fisher, their son. Off they went onto a playground of kids hollering in Spanish. Annie and Chris took Stephen in to meet up with Carson a bit later.

large than life lego character like figures- part of the kids' school pageantry for the holidays. 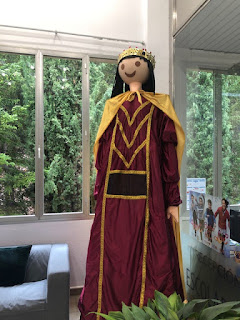 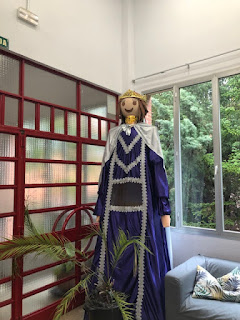 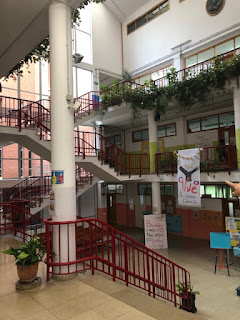 The adults cooked Thanksgiving dinner- hard to do in a small apartment since 2 burners, the oven & music would cause the power to shut off. Turn it off, hit the breaker switch, try again. We ultimately used the oven in the apartment we were temporarily using- turkey in one oven, pie in another 4 floors down. Elevators come in handy sometimes! 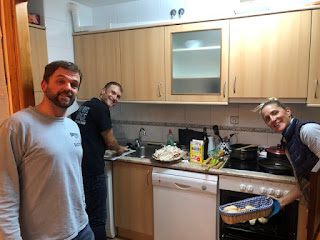 Kids came home from school, bouncing off the walls (and doing push ups along with us). Lovely dinner post school with all the favorites- turkey (special ordered), cranberries (imported from Sweden), sweet potatoes, and more. You might have thought we were in the US except for the chorizo flavored stuffing, he fact the kids went to school, and the fact that we were able to go poke around Jaca with everything still open late that night. 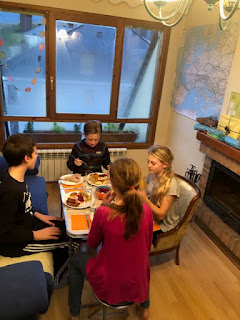 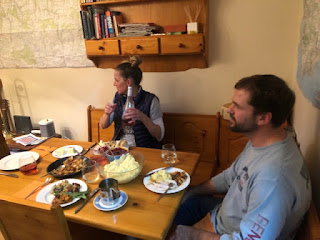 Pictures from Jaca on Thanksgiving night, complete with tag in the dark 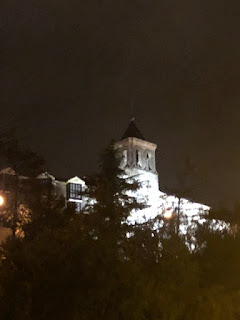 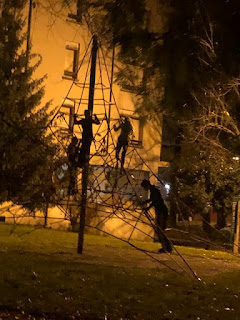 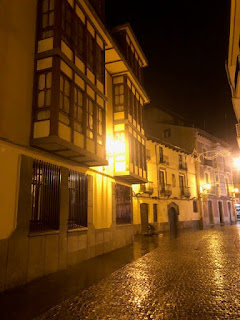 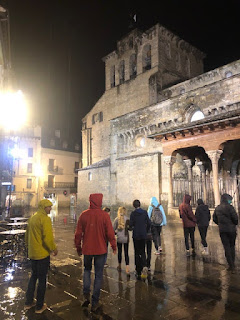 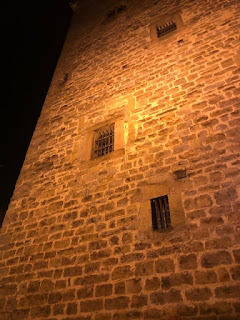 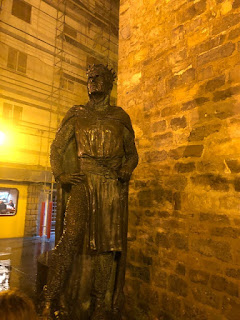 A side note on culture & the timing of events in Spain. The kids don’t eat lunch at school, but eat a “mid day meal” at 3. "early" for dinner is 8:30 PM- more typical is around 10 PM. Stores are closed late afternoon to early evening, but then reopen until into the evening. Hard to get used to a late, late schedule if you aren’t familiar with it. It did allow us to rent gear for a via ferrata trip at about 9 PM at night. More on that in the next post.