Translation of this newspaper headline: "Rubbish trash in N: Djurgårdsstaden - the garbage collection was down all weekend." Indeed...

Garbage has been an interesting source of exploration for us since we arrived.

We spent the first week at our short term rental apartment wondering what to do with the recycling (down the block in large containers) and garbage (Elizabeth finally suggested we push on the door that looked like a garbage room). Somehow the language program we're using hasn't spent a lot of time on vocabulary associated with trash and recycling.

Then we moved to our apartment in North Djurgårdsstaden (the name of our neighborhood). Jennifer and Sven, from whom we are sub-leasing, showed us what to do. The sign in the elevator reinforces what we're supposed to do... but then when we were left to our devices, we had to figure it out again. It's taken us a bit. We thought we had it down, then it broke. 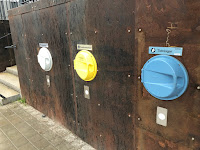 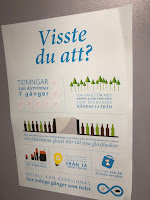 3) recycling of glass, cardboard, plastics, metal in a recycling room (often being cleaned out or being repainted- a good thing as this is quite a room). There are also bins collecting materials for donation (we only figured this out after maybe being here a month- these were in fact not the garbage bins, but the bins outside were the ones to use). The door to this recycling room seems to be routinely broken- door lock either doesn't open or is jammed open. Who knows why?

Here's a translation from the City of Stockholm of what we're supposed to do. 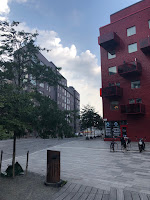 Garbage "cans" in the square outside our house are really tubes connected to a central vacuum system (they emit a quiet hiss at all times- in the picture to the right, it's the small rectangle in the front of the picture, or an easier to see view down below).

On Friday, Stephen and Elizabeth went to take the garbage out. Unfortunately, the central vacuum system had stopped working and bags were piled up outside the metal tubes. It took us a bit to figure out what was happening (and what the big construction waste containers were meant for).

It doesn't take long for a city's system to break down if a key piece function like garbage doesn't work! A few examples of a bigger problem. We were feeling bad for whoever has to unpack the vacuum garbage cans now plugged up with trash. According to the paper, we should be back up and running... at some point, I want to see how the system actually functions from underneath. 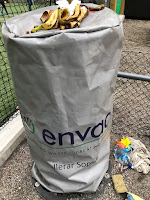 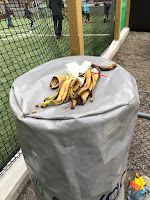 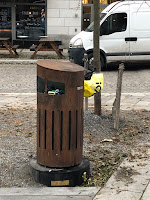