November 17, 2019
When people ask me where I am from, I often have a hard time answering them. The thing is I live in State College, Pennsylvania but I am not a Pennsylvanian at all. I won't go into all the 'why's of that but it just isn't a great fit--even though I love my PA life. My home town of Rochester, NY is even worse. I haven't been there for several decades and I don't feel the slightest twinge of connection with the place. Seattle worked reasonably well when I lived there. It was a cool place to call home so it kept a conversation going and I used it as my 'from' comfortably for 10 years. In truth, the four years I spent in New Hampshire probably fit me best. I have long thought I was just a New Englander who hadn't spent much time at home. Turns out though, I am Swedish. I know this now because I went for a run in the park last week. 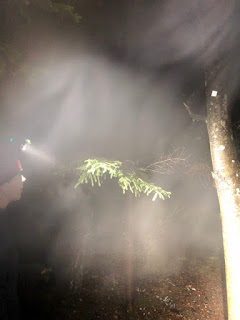 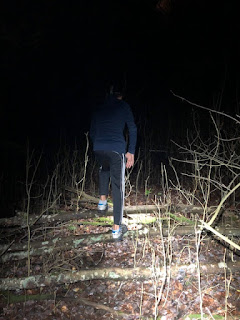 Stephen and I decided to skip the orienteering competition on Thursday because it was going to be a long trip out there and we weren't entirely clear on what was supposed to happen. But we felt we should go for a run anyway just to test out our new headlamps (they are bright, 1600 lumens). As soon as we got to the park, we ran into the woods where there are all kinds of trails and paths. We hadn't gone 50 meters before our lamps lit up on a tiny little reflective square on a tree at about eye level. I have run a bunch on these trails in the daytime and never seen one of these little reflectors. Glancing around with our lights on though, we could see another one just a few meters further down the path, and another. We decided to follow the reflective tags and jogged up the path--I am so glad we did.

Not too far down the path, the reflective tags veered off to the right. Not just onto the path less taken, but off the path, off the grid entirely. The terrain dropped a meter and there were trees blocking the way, but the little reflective squares were unimpressed and directed us away from what had been a fairly challenging trail and into the unknown.

The little reflective tags show up incredibly well, but they only reflect when you are pointing a light at them from directly in front of them, so if the path bends, you won't know it until you run out of tags ahead of you and start turning your lamp side to side to pick up the next one. Want to look at the ground to see where you are placing your feet? Fine, but if you do, you won't know when the reflectors veer off. Things getting a bit dodgy and thinking to back out? Looking back the way you came is to see nothing. You could never retrace your steps on one of these trails--they are only marked in one direction. 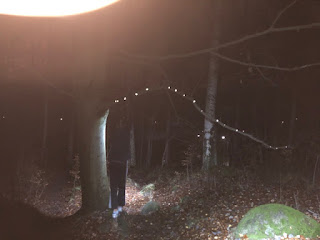 We ran and ran, finding the woods to be filled with these paths. Some of them were rather straightforward, adhering to major trails allowing people to run safely in the long Swedish nights. One of the trails we found marked a flow course set aside for night time mountain bike adventures -- will keep you updated on that excitement if the rain stops before the tracks freeze. But our favorites by far were distinctive for the glee with which they veered to the side at the least opportune moment to plunge into the wildest terrain to be found. We crossed streams, ran through brush, climbed embankments, took wild turns--often shouting in surprise to warn one another that something truly unexpected was coming. These favored paths of ours had arrows constructed from 6 or more of the little squares to let us know something really interesting was about to happen. You could almost see the gleam in the eye of the course setter when (s)he decided something was interesting enough to require an arrow... At one location, an entire overhanging branch was decorated almost like a finish line--but the trail just kept going afterwards. I still haven't decided whether it was to signal a congratulations for surviving the trail leading up to it or warning of the luge-like conditions of the trail immediately after it. But there were plenty of places where the reflectors just signaled joy at being out in the woods at night doing something wonderfully foolish. 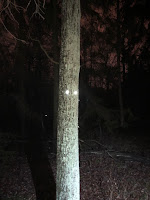 We had so much fun that we went running again on Saturday night. We hit many of our favorite paths from Thursday until we found a new game. Someone had put up double tags. From each double tagged tree you could, if you looked carefully, just spot another double tagged tree. The 'course,' if you can call it that, had no obvious beginning or end. We stumbled on it with no warning and then it either ended or we failed to find the next tree. It didn't go anywhere; the whole point was you could only know the direction to go next after you got to the next tree, so sometimes you would almost double back. There was no reason at all to run this course; it was so difficult to get through the brush that you couldn't even go very fast through most of it. It was just there because someone thought it would be fun.

What I love about these paths is that they are not making the best of a bad situation: they take the situation they are given and treat it like a gift. Can you believe that soon we will be able to run on these night-time only trails nearly 20 hours a day! And the rain makes things slippery under foot and sags the branches down so you have to duck and dodge more, adding more challenge! I generally loathe running, but crashing through the forest in the dark not knowing where I am or where I will be going even 4 meters further on--that is freedom, that is adventure, it is joyous. And someone figured out how to do it for the cost of a roll of reflective tape and a couple hours of prep work.

When my family plays four square in the rain in PA, it seems eccentric. When we go skiing while the snow is still falling hard (because it always rains immediately after it snows and then freezes into a heart-breaking crust), we have the park pretty much to ourselves. We end up doing a lot of things by ourselves in bad weather because Pennsylvanians generally just don't see the point in going out in bad weather. In Stockholm, the weather is pretty famously bad, but the response to bad weather is the most wonderful thing.This is how I know I am Swedish. These are my people. This is how I want to be in the world--outside and happy. Happy not because things are glorious and sunny, but because I am finding something new and that newness is wondrous.