28 October- a trip to the via ferrata 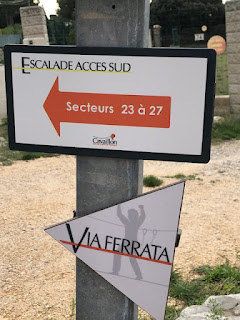 Ever since a friend told me of their existence 20 years ago I have wanted to try a "via ferrata." “Iron road” in Italian, these were paths, originally in the Alps I think, that allowed hikers with minimal gear to cross exposed faces that would not normally be open to them. I described the adventure to the family as a route along a narrow ledge in a pretty spot, where you clip into cables and bolts to safely traverse a place that wouldn't otherwise be safe to walk. I am still not entirely sure whether that impression came from a bad translation of the Italian or whether via ferrate just vary a lot in difficulty...

Anyway, upon arrival in Provence I was struck immediately by the cliffs everywhere and started poking around the internet to see what one might do to be near these glorious limestone formations. When I saw material about a new via ferrata overlooking the town of Cavaillon I set out to organize the time, materials, and enthusiasm to have a go. It turns out that all three were easy to acquire. 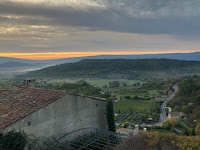 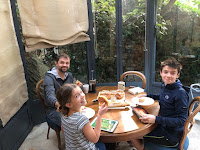 Our day did not start quite as smoothly as it could have. With the end of tourist season, southern France was taking advantage of the smaller crowds to do some road repair. For us this took the form of unannounced road closures on basically all the roads to Cavaillon. "Route barree” signs were everywhere, and no matter how small the road, we kept getting turned away from our goal. We kept wandering through smaller and smaller routes, with more than a few turn arounds in someone’s driveway or byway. The landscape was never straightforward, with immense amounts of agriculture- mainly small plots of various crops, intersected by waterways and roads.

We eventually made it to Cavaillon, rented our gear, and drove through town, around the backside of the hill, and to the Via Ferrata. Geared up in the parking lot and hiked through a neighborhood to the church at the top of the mountain overlooking Cavaillon. 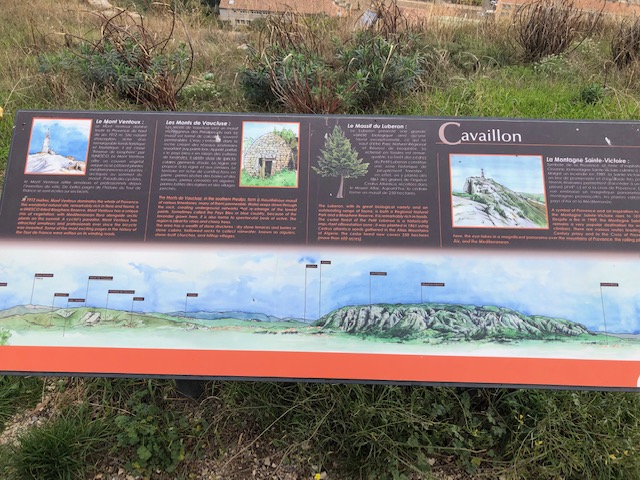 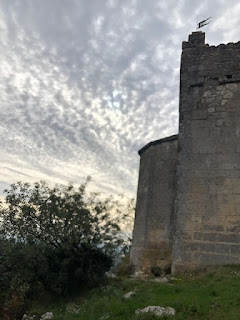 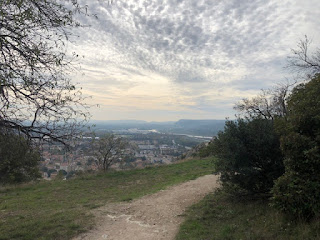 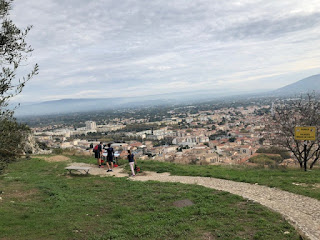 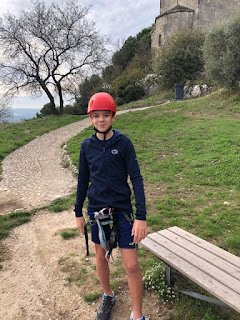 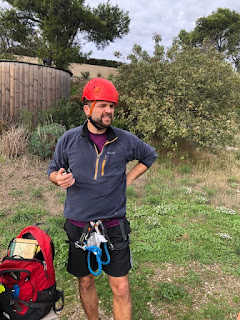 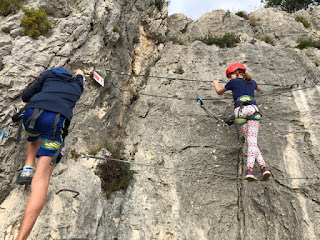 Turns out five minutes of practice seems like plenty when you are five feet off the ground. It seems....spare... when you are 500 feet off the deck. It is a heck of a lot harder to lower oneself over the edge of the cliff and proceed along the route. 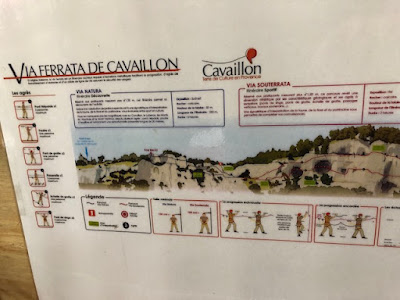 I went first, followed by Stephen, followed by Lara, then by Elizabeth. No path this- just literally iron rebar bent into steps and handholds on an often shear cliff. Looking down was breathtaking- and a long way down to the roofs of Cavaillon. An early tricky move involved clipping into a cable, then walking (sliding?) one’s feet across a cable strung between two clips, holding onto two cables at chest height. Stephen wasn’t fond of Lara following him- she made the cables bounce too much. We figured out the spacing with me scouting any tricky parts, Stephen close behind, then Lara close enough to Elizabeth to ensure she had a handle on clipping in each time, and moving to the next cable or clip. While our kids had climbed a lot in the gym  over the past few weeks, this was really their first time more than 20 feet off the ground outside. To do it in charge of their own safety was a big step up for both of them that they handled magnificently.

We finished the first part of the easier route and rather than working our way back on the easier route, we elected to try the first part of the harder route. Immediately, it was a lot harder- more overhung (where the cliff causes you to lean backwards), with a few places where the cable system led out into and over the mouths of caves. Definitely wild to be in there… not a lot of room for thoughts other than clip, clip, step/slide, clip, clip, step/slide. 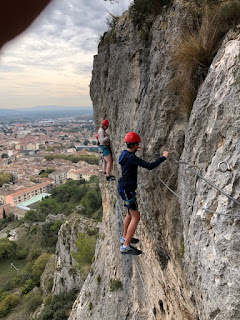 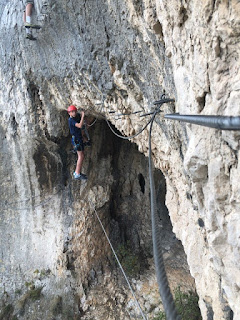 The kids did awesome- absolutely no problem moving safely along the cliff, nor did they get freaked out by the height. There were several big caves, some overhung ascents and descents, a whole range of puzzles thrown our way, but nothing fazed them. 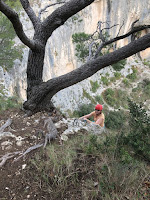 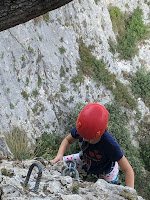 By the time we got to the farthest out point, however, we were getting tired. Not wanting to test our skills while tired we took the escape route up the cliff and out- tired, exhilarated, amazed by the view.

The walk back to the start? About 10 minutes (after about 2.5 hours of traversing out).

Very cool experience, though the adrenaline definitely started to wear off. A quick trip to the grocery store, an entirely non-linear route back in the car (thank you, route barree), and a chance to tell Linda and Steve about our adventures.