France #7: The Rhone Delta and The Camarague

Wednesday, 30 October- a field trip to the Rhone River Delta and the Camargue

We mixed up our breakfast by including eggs along with our now favorite pastries, then headed out to explore the area on the southern coast of France where the Rhone River empties into the Mediterranean Sea- an area known as the Camargue.

Our route led through the now famous (to us) town of Cavaillon (complete with many routes baree). We poked through the countryside and to a major highway- weird to go from small country roads to everyone driving 120 km/hour.

We skirted a massif of mountains, headed towards Marseille but turning off towards the coast. We passed the City of Arles- haunt of painters like Van Gogh and an ancient Roman way point between Italy and Spain.

Out into the Rhone delta region- diked, dredged, contained, walled into fields of pasture and crops by levees. This once was one of the biggest wetlands in the world. The monks worked hard to dike it and dredge it. In some ways, it felt a lot like South Florida, though it also felt a world apart.

As we drove in, Linda read the fantastical account of how several women of the bible set out from Palestine in a boat without sail or oar and landed here on the southern coast of France, leaving two of the “maries” to build a town where they landed, the others headed off to proselytize the word of god. I can't even begin to do the story justice... more research needed to figure out what happened.  The town name is now is Saintes Maries de la Mer.  Rather than research, we headed to the beach. Much like beach towns everywhere, a host of small shops, a board walk along the beach, jetties jutting out, sand to run in, shells to collect. 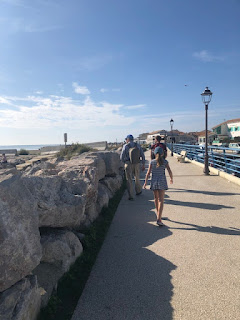 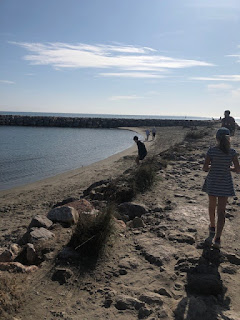 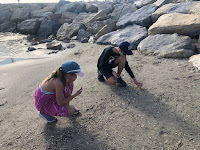 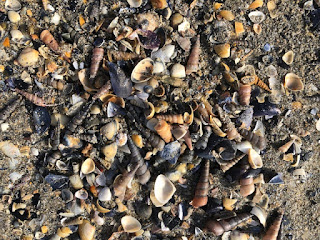 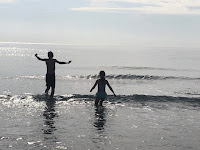 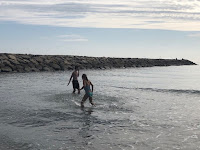 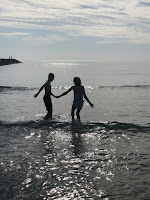 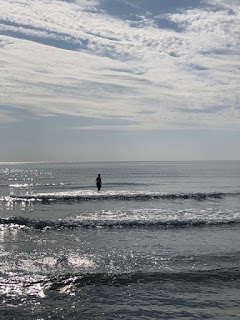 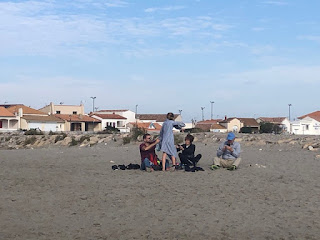 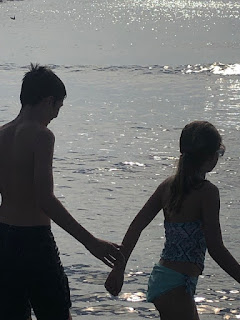 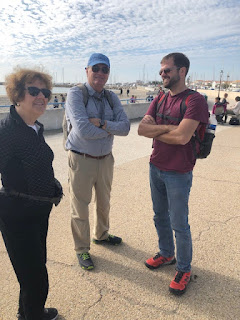 After playing in the water, we enjoyed a fish lunch and watched as people streamed towards the arena, dressed in their bullfighting finest. I didn’t dare take a picture of the ladies, but here’s a photo of what some of them looked like.

Apparently, the bullfighting in this area has a happy ending for the bull- while taunted, the bullfight ends with the bull walking out. It's apparently much more about the spectacle than anything else. We didn't go into the arena but it was clear that something was about to happen given the crowds lined up to go in.

A quick trip back to the beach for some more shells, found our car again, then drove to see if Elizabeth and I could ride the famed Camarague horses (many possible places, all “complete” for the afternoon—too full by the time we asked).

Who knew that French flamingos could be so entertaining? We explored the refuge for a while, gawking at the gawky birds: squawking, fighting, bathing, preening, flying (and landing, which didn’t look like it worked very well), sleeping, and otherwise doing what flamingos apparently do. Pictures alone don't do this scene justice- the movies are worth a watch. 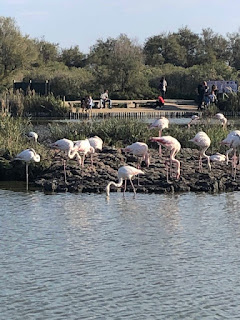 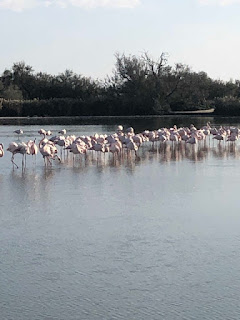 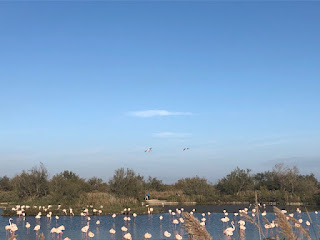 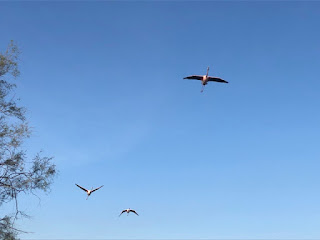 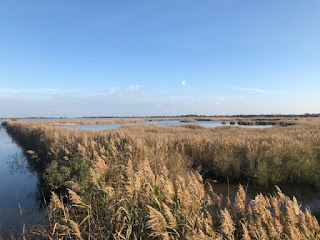 Movie 1: Follow the leader (and make a lot of noise):


Movie #3: Can you make your knees do this? (Apparently flamingos don't have knees- this instead the equivalent of an ankle joint. But still!)

After deciding we'd had enough birds for a while, we drove back to Gordes – trying to avoid Cavaillon and all its closed roads led us into the outskirts of Avignon and a traffic jam. Quite a drive in the dark back to our house. Chris and Elizabeth both had good colds at this point, so we had a quiet night in while Steve and Linda went out for dinner- by the sounds of it, they had an excellent meal despite what was now a mostly closed down tourist town of Gordes.