Folk music (think contra dance, not Pete Seeger) has become a passion of mine over the last few years. My interest is centered on learning the mandolin, but it has extended to the whole wonderful practice of learning and passing on melodies that have been played for centuries. Playing at lunch with colleagues on Wednesdays has been a real highlight for me the last couple of years at Penn State. The few times we have been able to get together with friends and just make music as a family have been awesome. Coming to Sweden, I have worked hard to try and make the connections that would permit that to continue here, but my efforts have met with only limited success. The kids both have music lessons and are making music at home and school, but my options are still pretty limited.

Enter Marty, our fairy godmother from Uppsala. I told Marty about my interests and she immediately suggested I start learning the nykelharpa--Sweden's traditional folk instrument. I was skeptical because what I really want to do is generate some basic competence on the mandolin, but after seeing a demonstration of nykelharpa playing on one of our first family outings, I was convinced.

The nykelharpa is a lovely instrument. It isn't entirely obvious to me why someone thought to make the first one, but the results are pleasing. In some ways it resembles a violin or viola--it has four strings that are played with a bow. However, in addition to the four main strings, it has an additional 16 strings that aren't ever directly played, but simply resonate sympathetically when their matching tone is played on one of the main strings. Also, one of the main strings is just a drone, like with some banjos--you always have a low C to rely on! Making the instrument even more peculiar, the strings are 'fretted' when keys along the side of the neck are depressed. This makes the instrument much larger and far more complex than any stringed instrument I have seen before. As far as tuning goes, it makes a mandolin with its mere eight strings look like child's play. More on that later.

Having set out to learn something about the nykelharpa, my first stop was a meeting in Uppsala (the center of all things nykelharpa I have learned) with Sture, a retired Materials Science professor and a friend of fairy godmother Marty. Sture is a master of the nykelharpa and agreed to meet with me today to give me the basics of playing the instrument. He took me to his home in a little 1950's suburb of Uppsala and we set to work.


The photo is me looking like I know exactly what I am doing. This has more to do with Sture's photography than anything else. Can you guess what I was playing? 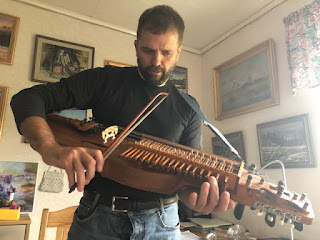 If you guessed 'itsy bitsy spider' you got it! The look of concentration is real--juggling is hard, so is unicycle riding. This is why few people try to learn both at the same time. I feel the same way about the bowing of the strings and the depressing of the keys. They are both new and challenging acts. We will take it as a win that you cannot hear the music I was making. Several years spent helping my kids do Suzuki violin did help--the bowing wasn't as bad as it would otherwise be. Also, having a really good instrument helped a lot.


Some things I like about it: 1) This is an instrument that makes people pay attention even if they are just wondering how the heck it works. 2) I love the tone variation that comes with a bowed instrument (so absent on my mandolin), but don't care for the twisted wrist position of a violin. I love my mandolin for the natural wrist position, but fretting four (eight) strings can be tough on the fingers. The nykelharpa solves this with easily pressed keys that give a perfect pitch with little effort at all. I am not nearly good enough to make full use of the bow, but I am excited by its possibilities.

Onto the second part of the saga. I was interested in acquiring a nykelharpa. We have stringed instruments mounted on the wall of our living-room in State College and they all have stories. Some, like the mandolin and guitar, I can play. Others, I can play a few notes. A few I can tune but not much else. I thought a nykelharpa would be a perfect addition to our collection and a great memory of our year in Sweden. If I can learn to play the thing, all the better.

Sture had warned me that a burst of yearning for Swedish traditional practices in the seventies meant that virtually all high school kids for a decade had to make a nykelharpa at some point. Most homes of a certain age have one of these unplayable pieces stored somewhere and, as a novice likely to make horrible noises with even the best of instruments, I wouldn't know the difference until it was too late. He convinced me I should look for a nicer instrument and agreed to help me in the search.

When I arrived at his house today, he was pretty excited. He had located a nykelharpa made by Eric Sahlstrom, a rather famous maker (as these things go), who made the instrument Sture himself favors. 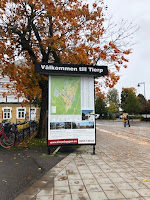 The instrument was located some 80km north of Uppsala in the town of Tierp--most notable as the site of a major steel factory. After a series of negotiations between Sture and the seller and a series of clarifications between Lara and myself over what we could invest in obscure Swedish instruments, a price was agreed on, money changed hands, and I set off for Tierp on a local train.

Swedish rail travel really is quite easy, and my laptop and a couple of journal article reviews passed the time quickly enough. Tierp itself looked to be trying awfully hard to be something other than a steel mill town, but its efforts (and note the fall color in the leaves already) were not aided by my seller. 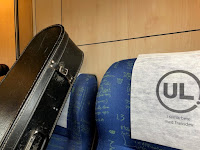 The seller was in his late fifties/early sixties and worked at the steel mill like his father. The nykelharpa for sale had belonged to his late father; his mother had also played. With them gone, he wanted the instrument to get some use and he "never liked the music." Apparently a childhood filled with nykelharpa music had left quite an impression. While he wanted the instrument to be loved, he didn't feel the need to be the one. So, after a terse conversation over "fika" (coffee) that said almost as much in silence as in words, I set off back for Stockholm instrument in hand. I made it back to Stockholm and home through the rain with enough time left in the day to check out the new climbing gym, have dinner, and tune the first four of the 20 strings.

Apparently a downside of owning a nykelharpa built by a genius builder is that he thought the resonator strings needed to be tuned in an obscure pattern that even Sture can't keep track of. I haven't even touched the resonators yet, but Lara was kind enough to observe that she could tell I was trying to play 'Twinkle Twinkle Little Star' so I guess I am off to a good start so far.

By way of parting, I leave you with a small tune Sture let me film so I would have something to practice from. Not a lot of master musicians are willing to go on record with itsy bitsy spider, so do take a moment to appreciate.