October 21, 2019
Monday morning, another week. October is hectic, more hectic than we want it to be. Field trip to Arizona was a culture shock- to go from one of the most walkable, transit friendly cities in the cities to one of the worst in the US. To go from parkas to 97 degrees F was also a shock. Ah well. I was there for a project meeting and it was useful to go, but also nice to "come home" to Sweden. A very friendly lady in the Phoenix airport helped me get on an earlier flight out of Phoenix- nice to be home at 3 PM vs. midnight. 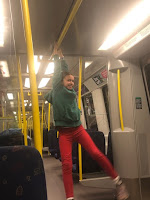 Nice to see my family again!

European friends we know from State College but who now living the Netherlands are visiting Stockholm this weekend as well. Chris and the kids joined them on Sat. at Grona Lund, the amusement park... it's been all decorated for halloween and is perhaps a bit over the top. Elizabeth reports now being scared of clowns. 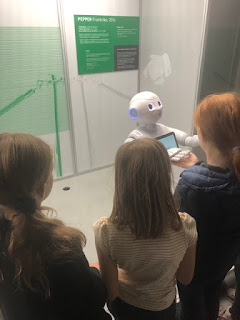 A rainy day yesterday- nice to have a quiet morning, then a trip to the science museum for E and I and friends while Chris baked an apple pie and made cranberry and lingonberry sauce. The robot exhibit is quite amazing!

We parted ways with our friends and the four of us then took the subway to southern Stockholm to join one of Chris' colleagues, friends, and family for a "Canadian" Thanksgiving. While the official holiday was last week, they could celebrate this weekend. Fun to join a thanksgiving celebration, complete with all the fixings (and a competition over which version of pumpkin pie was best). Didn't manage any pictures.


This week brings another visit to the tax agency, a talk by me at Uppsala about my work, a talk by Chris in Paris about his work, and as of Friday, a week off for the kids from school. We're meeting Chris' parents in France next weekend...