October 02, 2019
42000 people. That is how many people raced in the Lidingöloppet. It may seem like just a number, and not even a very big one, for a race, but it is actually the biggest cross country race in the world. 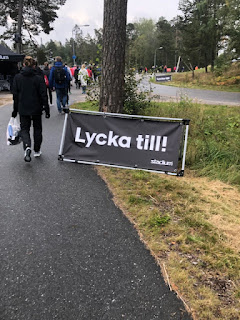 Going to the race (good luck!) 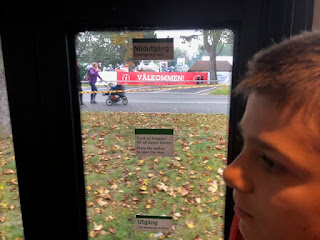 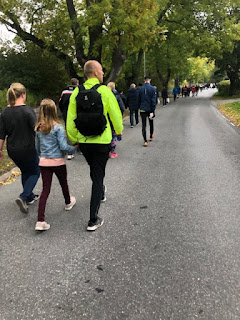 And when you are watching most of those people start a race in front of you, it is an awe inspiring sight, especially when you are in it.

Example picture of the race (we didn't have our camera once we got to the start of the race). Photo from Sportdryck, energi och kosttillskott för idrottare - Umara


Anyway, when they started, it was a lot of people sprinting, and a lot of people walking up to the starting line. A few minutes afterwards, they starting filling the starting gate with group three, and there were about five thousand people in that group, and ten minutes later, that group left as well. While all of this was happening, there were people grouping around the gates to get into the starting gate first, and aerobics going on, so it was a lot of confusion. Group four came and went as well, and then we went to the starting line. By that time, I could tell that group five was made up of the unranked and the people who would be walking.

The 15 kilometer race has different starting groups, so you don't have to either be passed the entire time or pass people the entire time. It worked on a ranking system of previous races that you had done, which we had done none, so we were placed into the fifth group, out of five. The first group, which was subdivided into a,b, and c, was mostly elite runners, all people who had done well in previous races. There were not as many of those people as there were other groups, so they started with the second group, about eight or nine thousand people running at once. Even though the area to start was huge, and so a hundred people could stand shoulder to shoulder and have room, it still was a few minutes before the people at the back of that group actually crossed the starting line.

So, we went into the starting line first so we wouldn't be stuck passing people the entire time. My dad assured me that we would still be stuck passing people the entire time. I was not convinced. But when the race started, with us in the first group, we started running, very fast, faster than I thought that we would have gone. About one kilometer in, we started passing people from group four who were walking. And then more people, who were from group four as well, who where jogging. And soon after, it was a constant stream of people from group four and then about the middle, people from group three. Besides rest breaks that had water, energy drinks, and surprisingly, cinnamon buns. There was never a point in the race where there was not a person within five feet of me, and not ten seconds, except the beginning, where I didn't pass at least two people.

We kept up a fast pace for the first ten kilometers, but the last five were brutal. The race description stated that there where "small hills, and lots of flats". The last five kilometers had lots of hills, some that made people going faster than me walk the entire hill. The last five kilometers were also in the place where we do orienteering, so I knew that the end was near. As we ran into sight of the finish line, I started looking to the bleachers on the sides, to see if I could see my mom and family, but right when I started doing that, my dad started sprinting, quickly gaining fifteen feet on me. I started trying to catch up, but he had to much of a lead, and had more energy than I did. He finished five seconds faster than I did.

Afterwards, I could barely walk, and my legs hurt, and I was starving. Luckily, there was a bunch of snacks right after, so the second problem was solved, but I could still barely walk. Overall, it was very fun, and I would do it again, but I wouldn't try the thirty kilometer race. 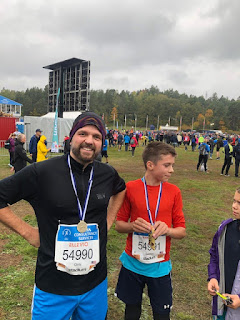 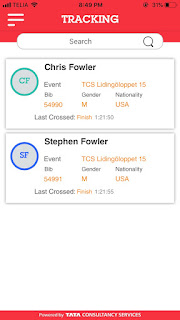 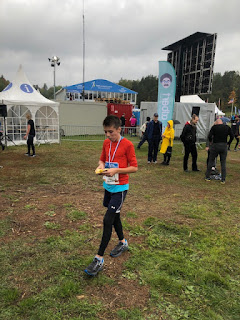 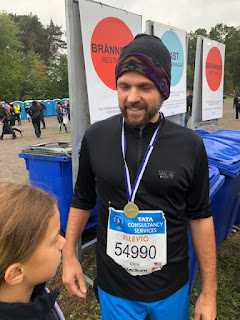