Field trip to The Netherlands and The Book of Mormon!!

When we got to Amsterdam, we started walking around in the direction of our "hotel". It was actually an extremely tiny boat that you could rent out a room. You could fit four people in one of the rooms but only if one of the people was on one of the small bunk beds fit into the side of the room. My mom got claustrophobia and I have never ever seen my mom get claustrophobic before so  it must have been really bad.The next night we stayed in the biggest hotel room I've ever seen I even got my own bed,I didn't have to share with Stephen who always steals the covers so when I wake up I'm freezing😨=😭=💔.

Anyway, that night we saw the Book of Mormon; it was so funny😆😃😄😁😀😊,my dad was laughing the whole time. It's coming to State College but it has A LOT of swear words so if you have youngish children or are a youngish child then I wouldn't recommend going. Me and my family went to the Royal Music Hall in Amsterdam. It was so cool because it looked so royal! I had been so excited about seeing the Book of Mormon; now I can't get the soundtrack out of my head.

While we were in the Netherlands, we went to an amusement/water park with my friend Julie, who had lived in State College. I was super excited to see her! We went down an extremely steep slide (which is shown down below),I screamed although it wasn't actually very scary. 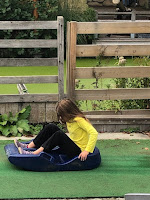 Me at the end of the really steep slide 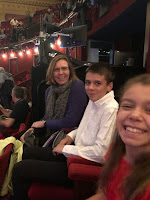 Us at the royal theater right before the Book of Mormon