September 07, 2019
A few days ago, I started school for the second time in a couple of weeks. I had been in seventh grade for the first few days of the school year, but in State College I had been in seventh grade math, and so doing it again was not on my list of priorities. So a week and a half in, I moved to eighth grade. However, I am going to talk about school before I moved to eighth grade and do another blog post about switching grades.

There where about 3 main things. First, we had to get to school via bus, and because school started early (if you can call 8:30 that) and we had to get to the bus stop, wait for a bus, ride the bus, and then walk to school, it ended up being a 30 to 45 minute commute each day, very long and very early.

Second off, the school is tall, small, and filled with kids. When I first got to school, I was surprised that if you got to school at 8:15, which is when the doors open, you would have 15 minutes to get to your first class, and then when you are switching classes, you get five minutes. It is a contrast with my old school, which had two minutes between each class and is a lot bigger. After my first class, we were let out, and my next class was English. I could see the English room down the hallway, and I thought that I could get there and to my locker with four minutes to spare. That was when I realized that the hallways could fit about one person going each way, and with people on the ground next to there lockers, it was practically one lane. After that episode, where I nearly ended up late to English, I understood the long class change time.

My final thing about my short lived seventh grade school experience is the lunch. For the first few days, my lunch was a very interesting experience, including lots of unrecognizable mystery meat, lots of recognizable vegetables, and hard, dry crackers with way too much butter. The mystery meat was not my favorite, but that was because it was very different from what kinds of foods that I had eaten before. I am fairly certain that the food choices are decided on what percent of the kids are from where, because there is a very diverse set of people, and so the dishes are normally Asian or European. Me being one of the few Americans, I have not seen any American dishes except the occasional french fry in the main course. For the first few days I didn't know what was good, and so I had lots of carrots and lettuce, which were always there, and very small portions of the main dish.
The school had a menu, which I kept trying to decipher, because it was in Swedish, and I recognized some of the things, like brod, or bread, but I could never figure out what was the main course.

Finally, the hard dry crackers. The hard dry crackers are my third favorite food that I have discovered in Sweden, behind the best pastries ever, which I mentioned in a earlier blog post, and lakrits, which are licorice, which is apparently very Swedish. The salt lakrits is a bit much though, it tastes incredibly salty. I started to eat one dry cracker per lunch, because they are pretty big, and there is a lot of butter, but I have ended up eating three or four a day. Anyway, that concludes my blog, with a part two coming soon. 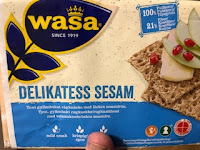 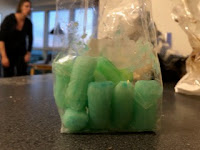