Jag bor här: I live here (and other musings on our new apartment)

We moved today from the airbnb we've been staying to the apartment we're sub-letting for the rest of our stay in Sweden.  The more we've talked with people here, the more we've realized that finding any apartment at all in Stockholm is hard- let alone a fully furnished one in a great location (within sight of the kids' school). Lack of any housing, let alone affordable housing, seems to be a gigantic issue here-- see more.

Kids & Chris relaxing after moving in our new living room. 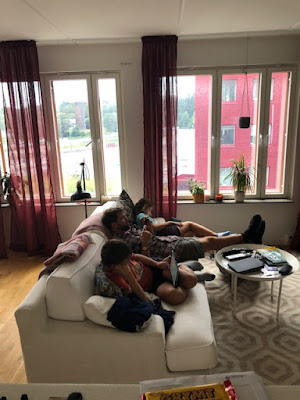 Although expensive, the airbnb we rented was in a great location for getting settled- pretty easy to get into the main part of Stockholm central (we even walked one day, but most days took the bus or subway). We also could take a cross town bus to get to the kids' school. However, 4 people in a 1 bedroom apartment is, shall we say, cozy.... the kids slept in the living room. The small space was especially noticeable these last few days as Chris was trying to recover from a sinus infection turned into something more debilitating. After 2 days, 4 movies and a bit of sleep-- he seems to be doing better, just in time for cleaning out an apartment, and hauling stuff around [Chris as editor's note:  recovery seems to have been more than adequate, as I was able to say 'yes' to Stephen when we stumbled on a walk-in's welcome squash court during our morning search for pastries and ended up playing for 45 minutes--Stephen's comment that surprise squash courts are one of the things he loves about cities in Europe was worth the price of admission ].

Airbnb (devoid of most of our stuff). 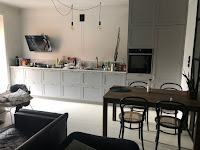 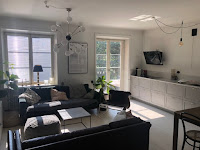 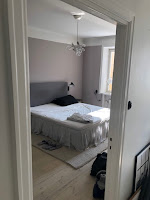 Part of our pile of stuff, complete with Elizabeth dutifully 'standing' guard. 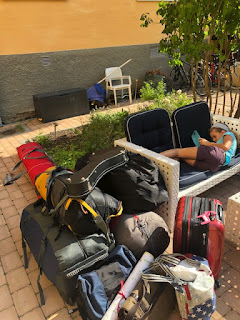 Our stuff equated to 3 big bags the kids could hide in, 2 smaller roller bags, 4 hiking backpacks, 2 school backpacks, 2 work satchels, and a bag of skis wrapped in clothes, along with misc. bags of food and stuff we've already gathered. Down three flights of stairs to the garden courtyard, then from the garden courtyard to the street in relays. The taxi driver took one look at us and declared we needed 2 taxis. However, we sent Chris and the kids to our new apartment via their new-to-them bikes, lowered the seats in the taxi, and absolutely maxed out the space in the back of the car. After our 15 minutes across town, I managed to get the bags to the curb, then to the tiny foyer of the building, into the elevator, to the 4th floor where I unloaded, realized I was on the wrong floor, and back into the elevator for a trip to the 5th floor. Chris and kids arrived with a bit of overlap with Jennifer and Sven, who are subletting us their place. They had a bit of a 'deer in headlights' look to them after finishing up their work here in Stockholm, packing their apartment, attending a wedding, with just a few days to spare before moving to Australia for a year. We recognize that look oh so well: moving across town was a lot easier than moving out of our house in State College, but this period of transition between places doesn't come without a cost. Hopefully they find themselves as well situated in Australia as we seem to be here.


This apartment feels huge in comparison with where we were: 3 rooms, 2 bathrooms (nearly unheard of for Stockholm, though we're in a more recently constructed part of town), and a spacious living room, kitchen, and dining room. Also an enormous central closet-- a great idea for otherwise smaller living spaces. 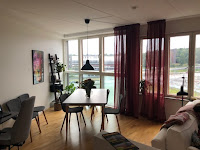 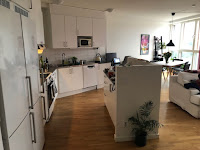 Kids' rooms... spare in decoration for sure! 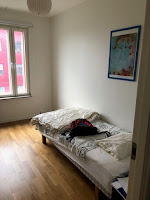 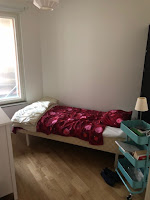 After unpacking, we wandered through the neighborhood to discover even more new neighborhoods behind, juxtaposed with old industrial buildings being repurposed and an inlet of the Baltic Sea. One of the new uses of the nearby old structure is a-soon-to-open climbing gym... we also learned that Stephen will start a beginning orienteering course on Thursday this week, so we're starting to figure out ways to be involved beyond school and conferences. 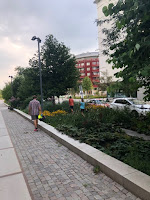 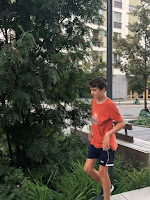 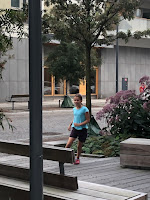 Old buildings in what was industrial Stockholm.  The building pictured in the center below will have the new climbing gym in it. Quite a structure to go climbing in! 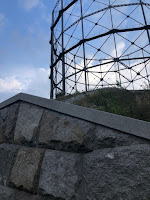 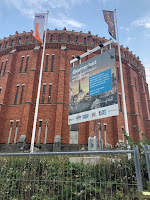 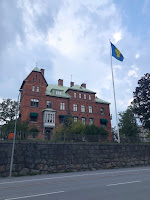 New construction and the edge of the Baltic Sea... 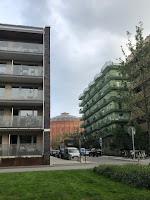 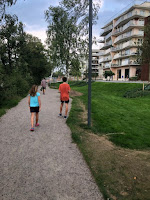 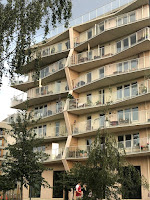 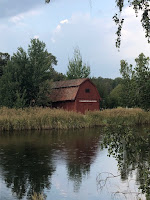 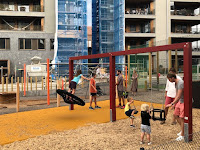 Tomorrow starts a new chapter: a longer term place to live, which will be a relief as we've been living more or less out of bags since July 18th, work for us, and actually a switch from 7th to 8th grade for Stephen (more on that soon).

In the meantime, we have an actual address and a place, for now, to call home.