We now live near an easy bus line to downtown Stockholm. A bus comes about every 10 minutes, so you don't really need to know the schedule. Amazing what a difference it makes to just hop on a bus.

Picture of a normally much busier street near where we first were living: 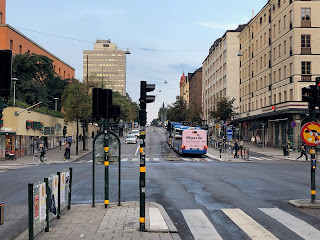 You do need to know where the bike lanes are. Cars- not so scary. Bikes and scooters? Whizzing by in great numbers. The area where we are living plans for .5 cars/apartment and 2.5 bikes. It is far easier to bike than drive. We now have 4 bikes, though need to find a bit bigger bike for me-- the challenge of long legs! Regardless, it's nice to have a bike to explore- starting to see more of the area around us.

Scenes from the end of the island we live on, and across to the island of Lidingö. A note: while our pictures seem to be of the built environment, the amount of park space, open space, and water is astounding and everywhere. We'll write a separate post about that as well. 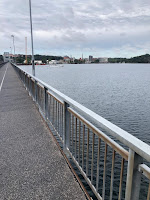 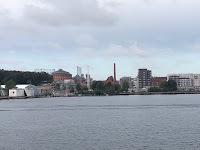 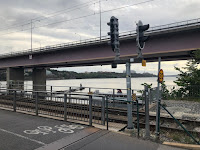 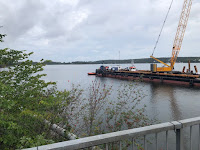 
The subway is great but often quite crowded. A colleague said she bikes to avoid getting sick in the winter- no doubt given the shear number of people packed onto any given train.

To get to Uppsala University (pronounced oop-sola, emphasis on the sola) (about 70 km north), I get to take a bus, then a subway, then a commuter train, then walk. Took my first official 'work' trip to Uppsala yesterday- quite a process. I'm sure I'll get faster at it as I figure out where things are.

Once in Uppsala, I was struck by how much English I was hearing- Uppsala University has become a very international university with students from all over. English seems to be the common language.

Nice to start meeting colleagues at Uppsala's Peace & Conflict Research Department; people are working on critical and challenging topics! Sounds like there is a department wide "fika" (coffee) on Thursday morning- I'll attend and hopefully meet more people then.

In the meantime, time to take the bus to pick up a box that arrived by ship and state department courier. More forms of transportation!