On a more serious note, today marked the return to the "show up and look like an adult" work world. The Baltic Sea Science Center is hosting the 12th Baltic Sea Science Congress at Stockholm University, a scant 1.7 kilometers from where we are staying right now.

Anyway, I've spent a lot of time trying to figure out the dynamics of the Chesapeake Bay and its watershed for the last 7 years: how to address and manage runoff of nitrogen, phosphorous, and sediment from various rivers and streams into the Bay. Nitrogen and phosphorous are important nutrients for plant growth: put too much in a waterway and they promote the growth of algae. It's a lot like giving a kid too much sugar: they bounce off the walls, then collapse. In this case, the algae die and as it decomposes, the decomposition process uses up the oxygen in the water, which in turn leads to "dead zones" without much or any plant/animal life. Sometimes the variety of algae is toxic-- resulting in toxic algae blooms that seem to be occurring all over the world. In the Chesapeake and the Baltic both, building sewage treatment plants has really helped reduce the extra nutrients in water and a lot of good progress is being made.

However, nutrients coming from runoff from cities and farms -- called non-point source runoff-- is a big and growing issue, especially as we have more concentrated rainfall. The laws in the U.S. aren't very good at regulating or preventing this kind of runoff, nor apparently are they working much better in the Baltic Region.

One of the main reasons I wanted to come to Sweden is to better understand both the challenges and solutions being pursued in the Baltic Sea region so we can learn from each other: what is working, what could be tried.

Having spent a lot of time working on Chesapeake Bay issues, I now know a lot of people working throughout Pennsylvania, New York, Maryland, Virginia, and beyond- the states that make up the Bay and its watershed (the area from where water flows into the Bay).

However, I had to take a deep breath when I walked into the conference today- while I understand generally the issues here, I don't know the people working on it (it may surprise you that I'm more than occasionally shy). Though I lived in Finland in 1991, it was as a high school student and I don't actually know this region's geography very well. I know that I'll meet plenty of people and get to know this region better (soon...), but it was a reminder that I'm starting from the beginning but not really. I could have taken most of the discussion today and replaced "Baltic" with "Chesapeake" or vice versa. The issues in both regions are really common- we understand a lot about the natural science of what's happening, we're making progress, but not fast enough and we need more help. 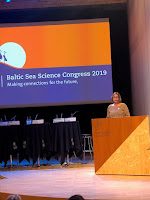 As Isabella Lövin, the Swedish Minister of the Environment and Climate , noted today, it took decades to build the problem facing the Baltic, and that old debts can be paid if the political will is there. She closed her remarks by observing that the countries around the Baltic would not be meeting their goals as planned by the year 2020; however, we "cannot allow ourselves to become passive- this is far from healthy. We owe it to our children and cannot give up. We owe it to the planet, the natural systems that lifted [Sweden] from a poor state to a prosperous nation. It is up to us to make sure that troubles are ours, and the beauty should be our children's to cherish."