Ö is for island

August 24, 2019
Ö = island
Onomatopoeia is a wonderful thing, but how many words in English look like the thing they represent (bed comes to mind but not many others)? The Swedish Ö is particularly apt because, at least where we went today, the sea is full of islands with wonderful granite swimming destinations just a few meters off shore. This is, I imagine, why the Swedes decided to put the umlaut on top of their letter/word. 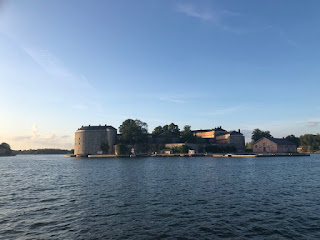 In case you hadn't guessed it, we took advantage of another beautiful summer day to go explore the Stockholm archipelago. Somewhere between 24,000 to 30,000 islands, depending how you count them. Many served by regular ferry service from Stockholm, we were out all day and only scratched the barest surface of what was there.

The ferry ride starts in Stockholm and the first forty or so minutes are striking for the continued density of residential buildings well out from the city. Kilometer after kilometer the shore is lined with 5-10 story buildings, maintaining a density you just do not see in places like Seattle. The residential towers are mixed in with occasional historic buildings, forts, and palaces that pop up at odd times. There are frequently also parks or just wooded areas where building simply hasn't been allowed. 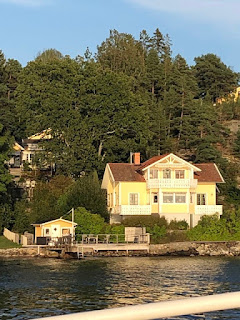 Eventually, the density drops and you start to see islands with no settlement or homes that are considerably larger. At this point, the landscape begins to resemble the Thousand Islands area on the St. Lawrence River in upstate New York. The granite slabs and cliffs along the route spark a strong sense of familiarity for me based on summers spent in the lakes of Ontario and Quebec.

Our ferry took us to Vaxholm: a popular destination with more people than we had hoped to disembark with, but we had a leisurely morning and didn't get going in time to catch the ferries that might have easily taken us to more remote locales. As with most such destinations, crowds diminish with remarkable rapidity as one moves away from the parking lot (or pier in this case). After a quick game of chess in a park, we rented some bikes and headed off on the bike path to find a quieter patch of ground to spend the day. 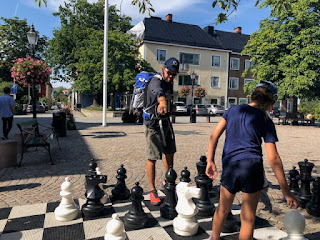 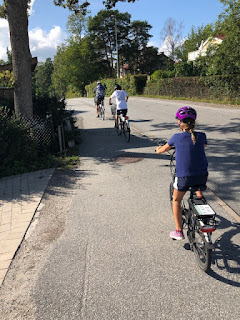 Our modest efforts to get away from our fellow tourists were rewarded with a quiet (at least initially) beach featuring a slow sandy entrance to the water for the kind of people who like to slowly remove band aids and a much more effective granite slide into the deep for people who know it is much easier to move quickly than not. We swam in the Baltic (a first for me) and baked on the rocks for the better part of the afternoon before returning to dinner in town and a sunset ferry ride home. We may have gotten on the wrong ferry and taken an extra half hour on the boat, but the evening was lovely and we didn't mind. 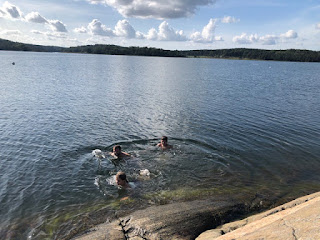 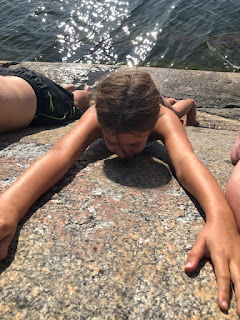 Sunset cruise back towards Stockholm. 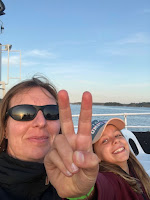 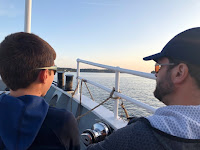 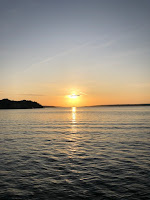